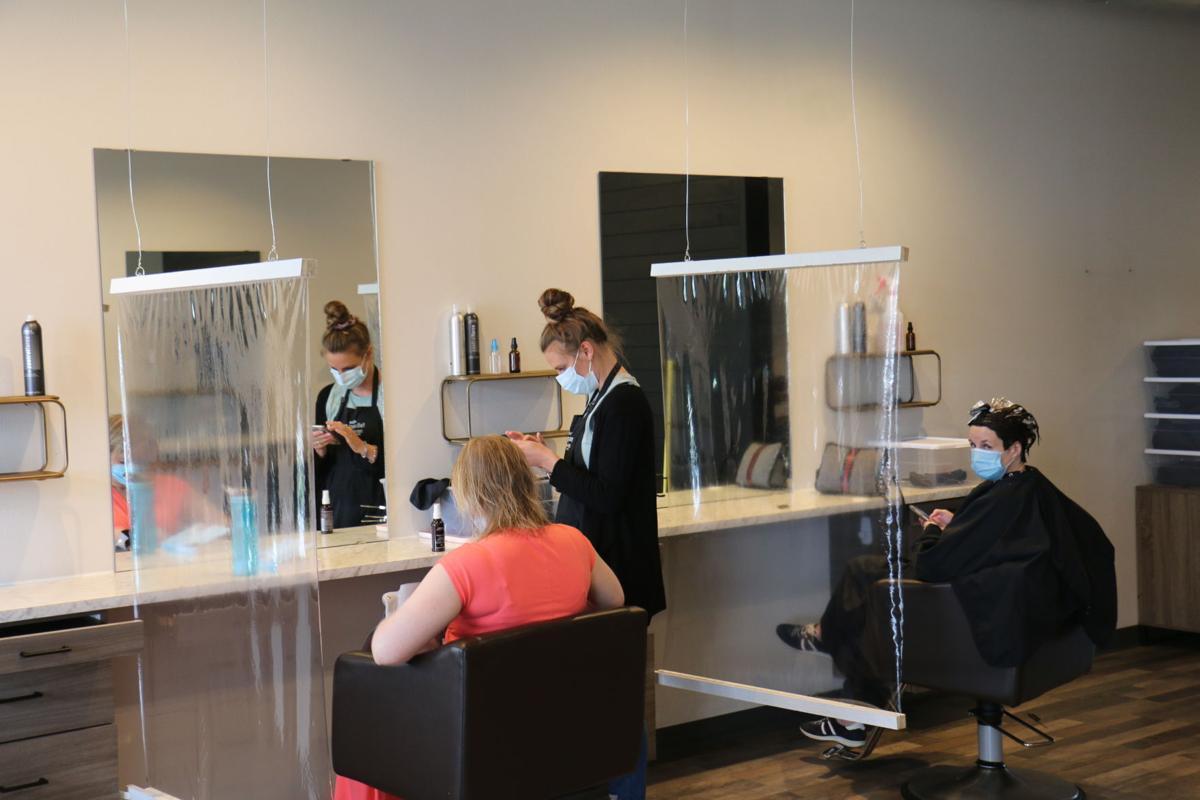 At Rooted Culture Salon, guests and stylists are required to wear masks, and styling stations are separated by hanging plastic partitions. 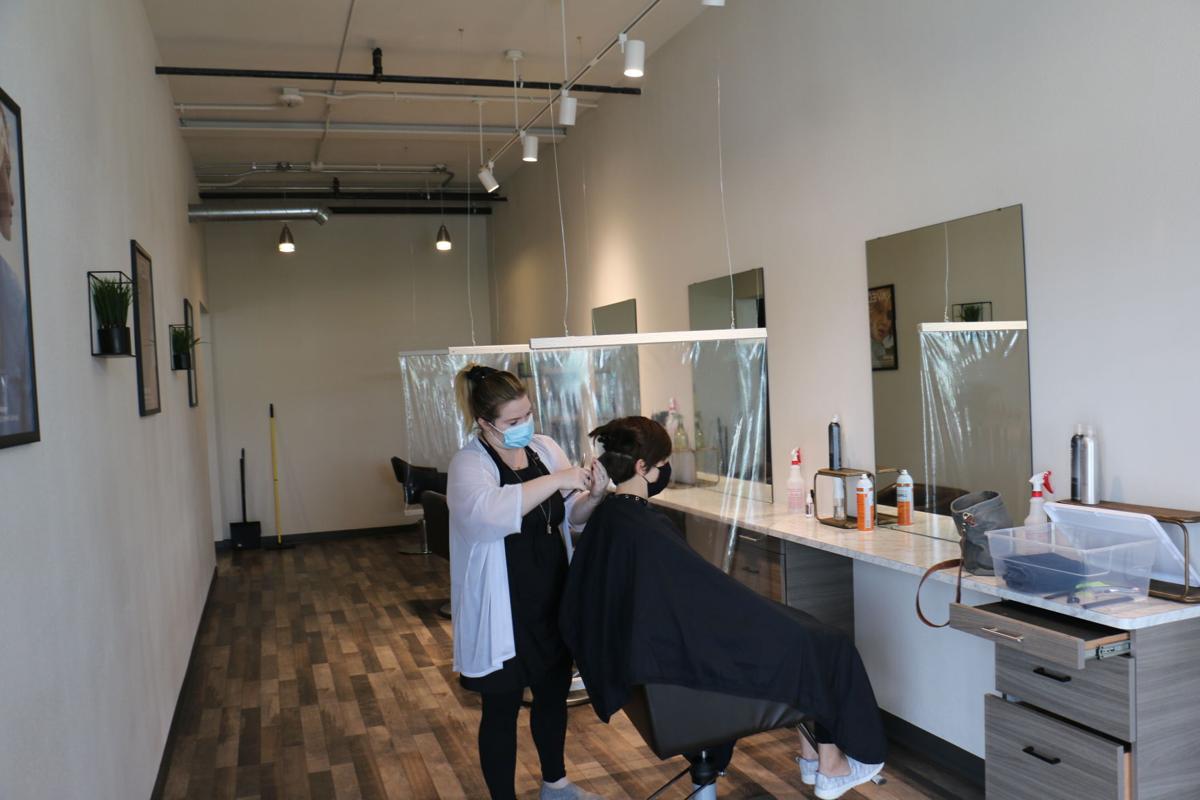 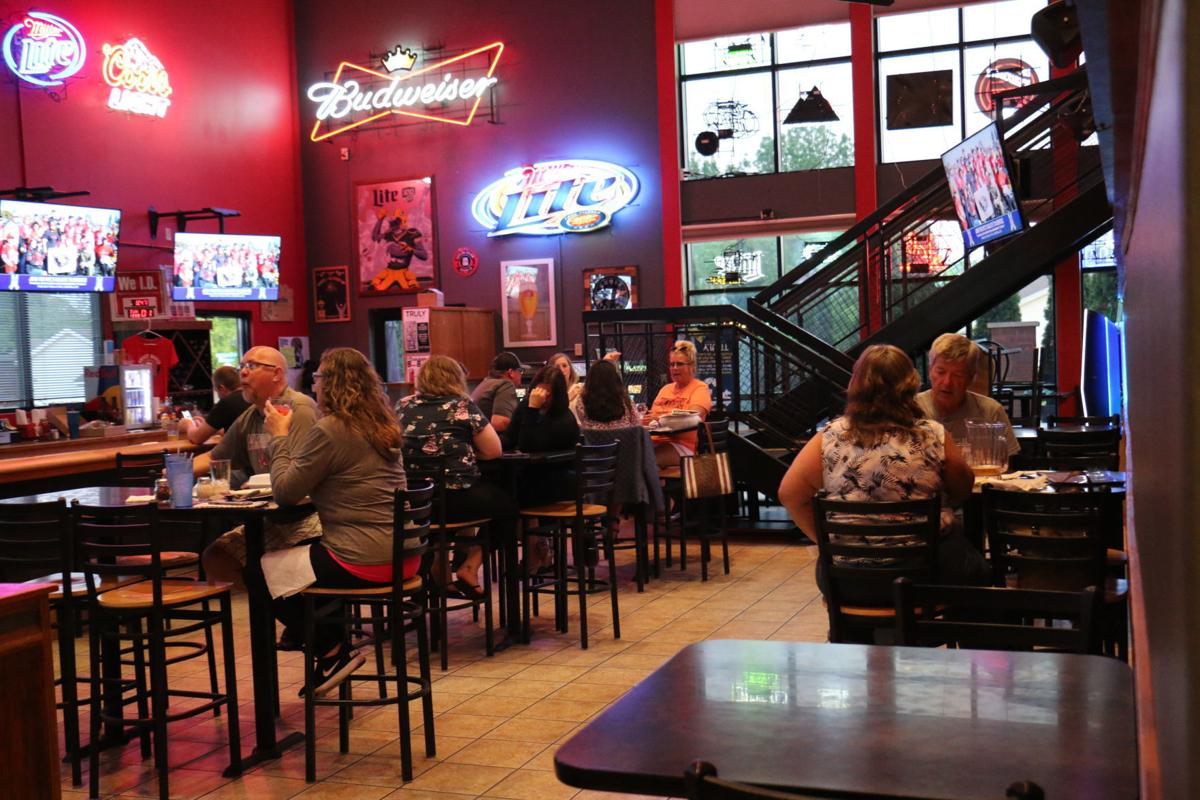 Dine-in service returned to The Draft House on May 26.

At Rooted Culture Salon, guests and stylists are required to wear masks, and styling stations are separated by hanging plastic partitions.

Dine-in service returned to The Draft House on May 26.

Things are anything but normal these days at Rooted Culture Salon.

Before each shift at the 957 Liberty Drive business, staff get their temperature taken, both staff and customers are required to wear masks and guests are asked to use hand sanitizer when they arrive. And when guests arrive, they go straight to their chair, as the waiting area furniture has been removed.

But that’s better than nothing, owner Jacqueline Kronabetter told the Press a few days into reopening after being closed from mid-March until May 26, when the county’s Forward Dane plan moved into Phase I. That started less than two months after she bought the location from her former business partner and went through a rebranding.

“We had zero sales the last nine and a half weeks. That was incredibly hard financially and horrible timing,” Kronabetter said. “We’re just happy to be back open and people are happy to come back and be pampered.”

Hers is one of many businesses across Verona that had been closed or severely restricted during the shutdown and still remain altered while waiting for COVID-19 restrictions to loosen. The county’s plan now allows restaurants and bars, gyms, retail establishments, salons and many other businesses to open to customers at 25% capacity, with seating at least six feet apart to ensure social distancing. In salons, spas and tattoo parlors, customers and staff are advised to wear cloth coverings.

While it’s starting to feel a bit more like normal for some, business is down and finances have been difficult. And for others, it’s just strange, with seating removed or blocked off and new systems in place for customers.

At Toot and Kate’s Wine Bar, which had just celebrated its four-year anniversary before the pandemic, management has had to adjust how patrons order at the bar.

Only 10 patrons will be allowed in the restaurant at a time based on the capacity rule, where wine was already self-serve. But now, patrons are being given finger cots to use the self-service machine. When paying for their drinks on an iPad, customers are provided their own stylus, which is later disinfected before being given to other customers.

At Burn Fitness 24-7, owner Jenny Blake has had to change procedures significantly, too, with extra cleanings and a computerized entry system ensuring no more than 10 people are there at once.

Blake received one of the city’s small business grants in addition to the donations from her “amazing community of members,” to help make ends meet while closed.

She especially needed the grant because she had purchased new treadmills just before having to shut down, and she was worried about having to make up the cost through revenue.

Kronabetter got help from the city’s program, as well, and found it incredibly helpful, she said.

Draft House owner Tonya Patten said she wasn’t sure what to expect when she reopened the sports bar and restaurant at 1010 Enterprise Drive. She said patrons are enjoying eating outside on the patio more than dining inside, but was surprised that some of the first patrons to return were older folks, rather than families.

The restaurant had to close abruptly in the middle of a busy St. Patrick’s Day when the state’s Safer at Home order was issued March 17. It remained closed for a few weeks, but began offering carryout on April 2. Patten said that helped to sustain The Draft House through a difficult period.

Now, most of the staff is back and the restaurant is serving its full menu.

“I think people are just nervous and at different comfort levels,” Patten said. “We’ve done everything we can to make people feel comfortable, make everyone feel safe as possible.”

Ensuring people are able to keep a safe distance from one another has brought out some creative systems.

In order to both keep 24-hour access at Burn Fitness, but also keep no more than 10 people working out at a time, Blake has overhauled her door entry system and is providing all members a new key tag.

Blake has spaced out the bikes and treadmills, but had to block off a few ellipticals due to not having enough space for all her equipment to meet distancing guidelines. She is cleaning after every high traffic period, which she said is approximately every two and a half hours.

The styling stations at Rooted Culture are spaced six feet apart, and Kronabetter has created plastic dividers which hang from the ceiling between stations to provide extra comfort. The salon is not providing hair blow drying at this time.

At the Draft House, patrons are expected to physically stay apart, with every other table in the dining area being closed off. Staff have also put up two hand sanitizing stations and the emergency exit has been converted to a normal exit to ease traffic through the restaurant.

Kronabetter said she has been trying to put customers at ease doing more than what’s recommended under the Forward Dane plan.

She’s only having four stylists to work at a time, as she can only operate her business at 25% capacity.

“We’re really trying to stress that we have gone above and beyond the guidelines and protocols given to us, putting our own protocols on top of that,” Kronabetter said. “We’ve been incredibly busy. People are enjoying being back in the salon and feel comfortable with the protocols and guidelines we have put into place.”

Even with being allowed to partly reopen, Blake said her business won’t be able to offer all of its services right away. Those limitations include no group classes, less personal training sessions and the infrared sauna isn’t allowed to be open, which Blake said is a significant revenue loss.

“Right now, even though we’re open again, our studio isn’t large enough to do spacing during group fitness classes,” she said.

Blake said she doesn’t expect to see everyone come back in the next month. She said so far only a third of members have updated their access cards to the new system.

To keep safe the most vulnerable of her members, from 11 a.m. to 1 p.m. daily, only members 65 and older are allowed to book workout appointments.

At Toot and Kate’s, wine tender Liz Thomson said she feels a balance must be struck between exercising caution and being off-putting to customers.

She said now the bar will focus on getting the word out about its doors being open again, and making everyone feel comfortable about returning because of its consistent cleaning and sanitizing procedures.

“I like what we’re doing here,” she said. “It’s being safe, but it’s not being dramatic — alienating or making customers feel uncomfortable.”

Patten said she is grateful for her loyal staff, most of whom returned after weeks away. She noted that some staff have been working with her there for 16 years.

“I’m super blessed our staff has been here as long as they have,” she said.

Neal Patten, community reporter, can be contacted at neal.patten@wcinet.com.

Badger Prairie Needs Network has doubled down on its efforts to prevent food insecurity in Dane County during the COVID-19 crisis, even though…