You are the owner of this article.
Edit Article Add New Article
You have permission to edit this article.
Edit
Home
News
Sports
Obituaries
Opinion
Things To Do
Classifieds
Legals
FAQ
Newsletter
Submit Your News
e-Edition
Special Sections
Corre la Voz
1 of 3 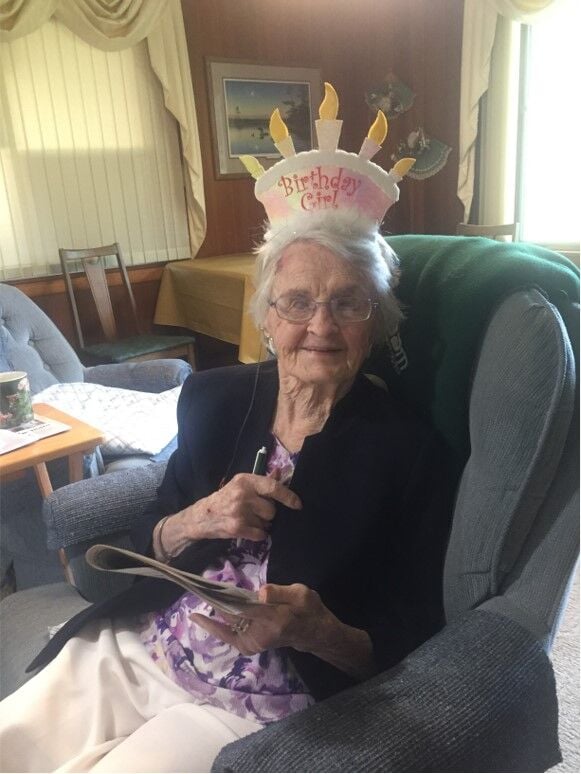 One long-time Verona resident has kept the “sunny side up” for a century.

And with nine siblings, five children, 13 grandchildren and 24 great grandchildren – there was plenty of family to help her mark her centennial.

The seventh of 10 children, she was born Sept. 11, 1921 in Salem, Oregon, and spent most of her early childhood on a farm in rural Mazomanie, Wisconsin before moving to Verona in 1947, where she’s lived since.

During her 74 years here, she’s become a familiar face around Verona, whether it was volunteering at Badger Prairie Needs Network into her 90s, being a friendly neighbor who attended community block parties, or the years she spent teaching reading to disadvantaged youth who were struggling in school. And she also became known in her congregation, St. Andrew Catholic Church, where she attended mass almost daily.

Throughout all of her endeavors, what perhaps has most left a lasting impact is her sunny disposition, epitomized by her favorite saying, “keep your sunny side up.”

Like the 1929 song which says, “Life can be a pleasure or a pain, good or bad, successful or in vain; happiness is just a point of view, hide the side that gets blue,” Jamieson has tried to maintain an optimistic, positive spirit, even about aging.

While she was the valedictorian of her high school class -- though she is quick to tell you that her class only had 27 students -- she said one of her primary unrealized dreams was never attending college because she could not afford it.

“I think I would have liked to have gone to college, I enjoyed learning about things,” she said.

She worked as a clerical worker for the State of Wisconsin for many years, mostly as a typist and bookkeeper, which she said she enjoyed, and she was also a teacher in the Verona School District, where she assisted with teaching reading to special needs students.

Over her century of life, she said that computers have changed the world around her the most.

Instead, she keeps her mind sharp by completing newspaper crosswords daily and being an amateur entomologist – she loves to collect bugs.

But her greatest passion and a source of energy in her life is her love for playing card games with friends including Cribbage, 500, Euchre, Rummy and Bridge – or Go Fish, when the grandkids come around.

And if money or a prize is on the line, she becomes even more competitive. It is often the case that when a game of Cribbage is played penny-a-point, and she is the winner, it is pay up or else write up an I.O.U.

“It was, and still is, Lou’s way of having fun and relating to people,” her son Joe told the Press. “And, her card playing skills have not diminished one bit. Stop in and try them out.”

It’s evident that family means a lot to Jamieson, who said that her greatest inspirations in life were her parents, and that her proudest achievement was raising her family.

“There were many challenges, but I think I did okay,” she said about being a mother.

Her happiest memory is her wedding day and the person she’s lost that she misses most is her husband, Howard.

She and her husband got to enjoy several globetrotting adventures together, her favorite being when they went to the Holy Land in Israel, but Howard particularly liked Mexico, and they visited there three or four times, she said.

“I really enjoyed all of our trips,” she said.

Asked to impart advice to younger generations, she said,

“Always do a good job. Go by the rules in front of you, whether they be church related, or state related.”

And when it comes to aging, she dispensed this piece of wisdom,

Community reporter Neal Patten can be reached at npatten@wisconsinmediagroup.com