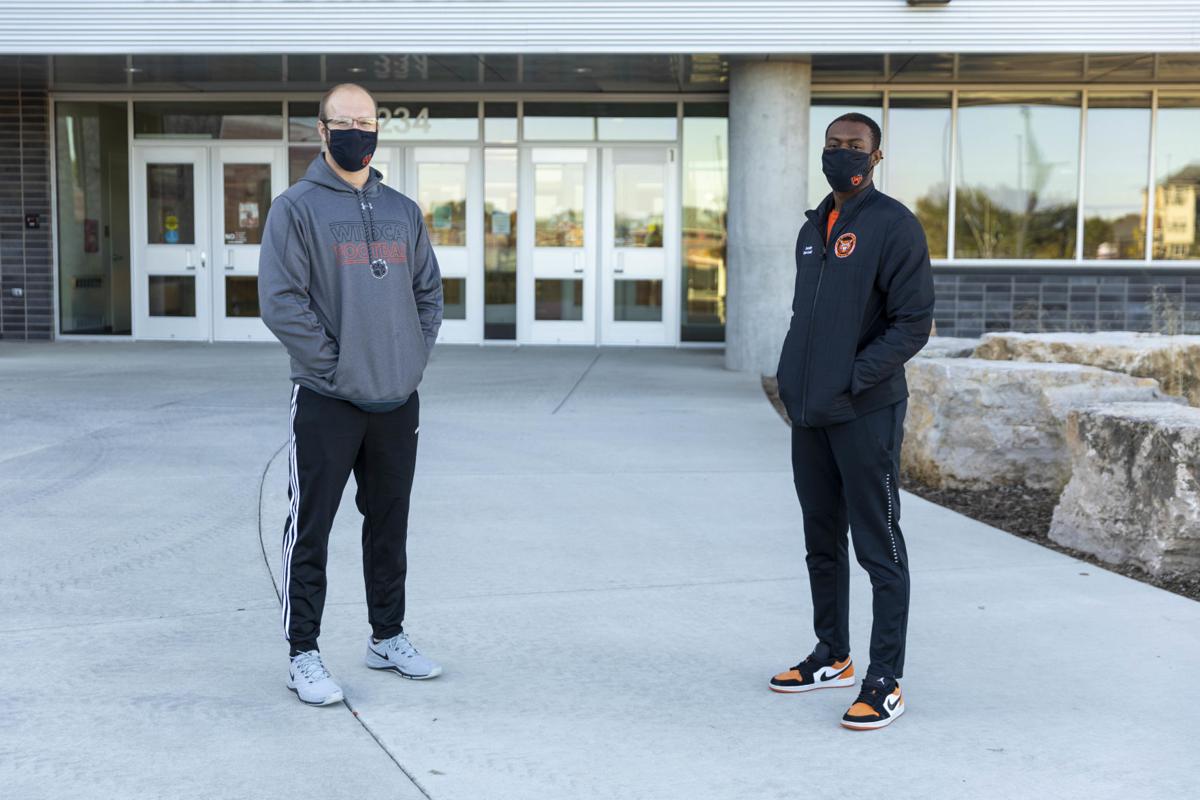 From left, Verona Area High School phy ed teacher Adam Stiner and boy’s head basketball coach and lead security assistant Reggie Patterson stand outside the school. The two both started with the Verona Area School District in July 2019 as members of the security team, but have since been promoted into new roles for the 2020-21 school year. 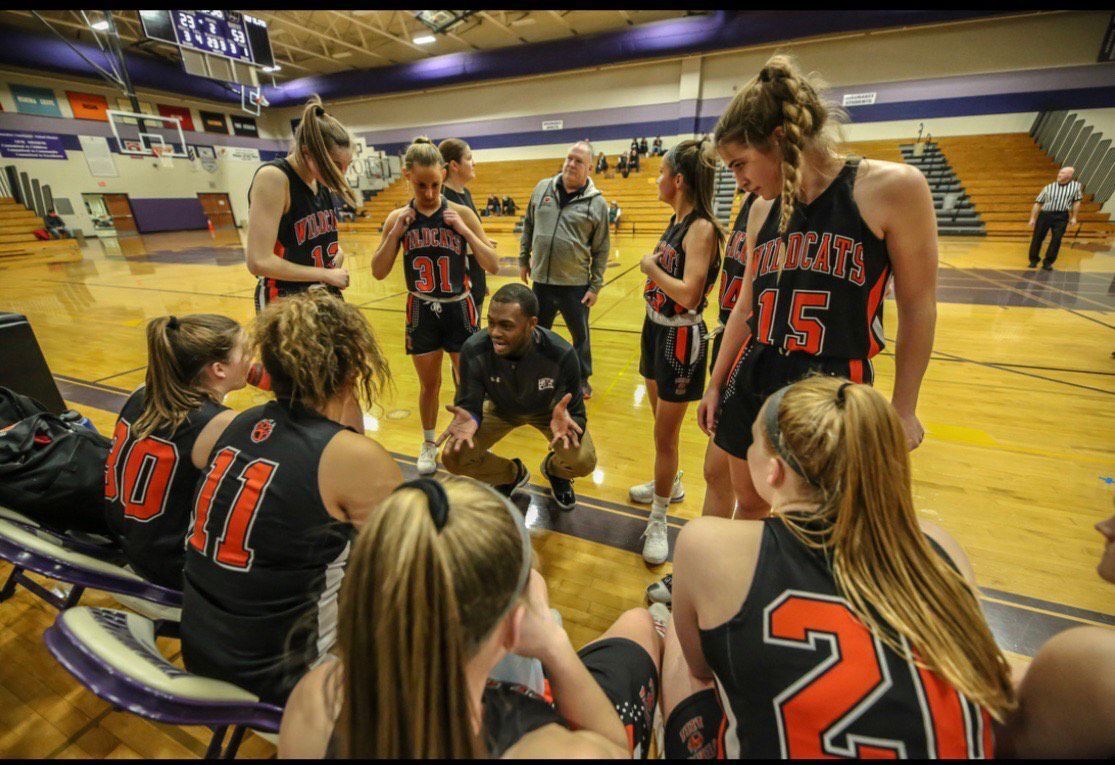 Center, Reggie Patterson speaks to the Verona Area High School girls’ basketball team as the assistant coach. Patterson, who was hired in July 2019 as a security assistant at the high school, was promoted to boy’s head basketball coach earlier this year. 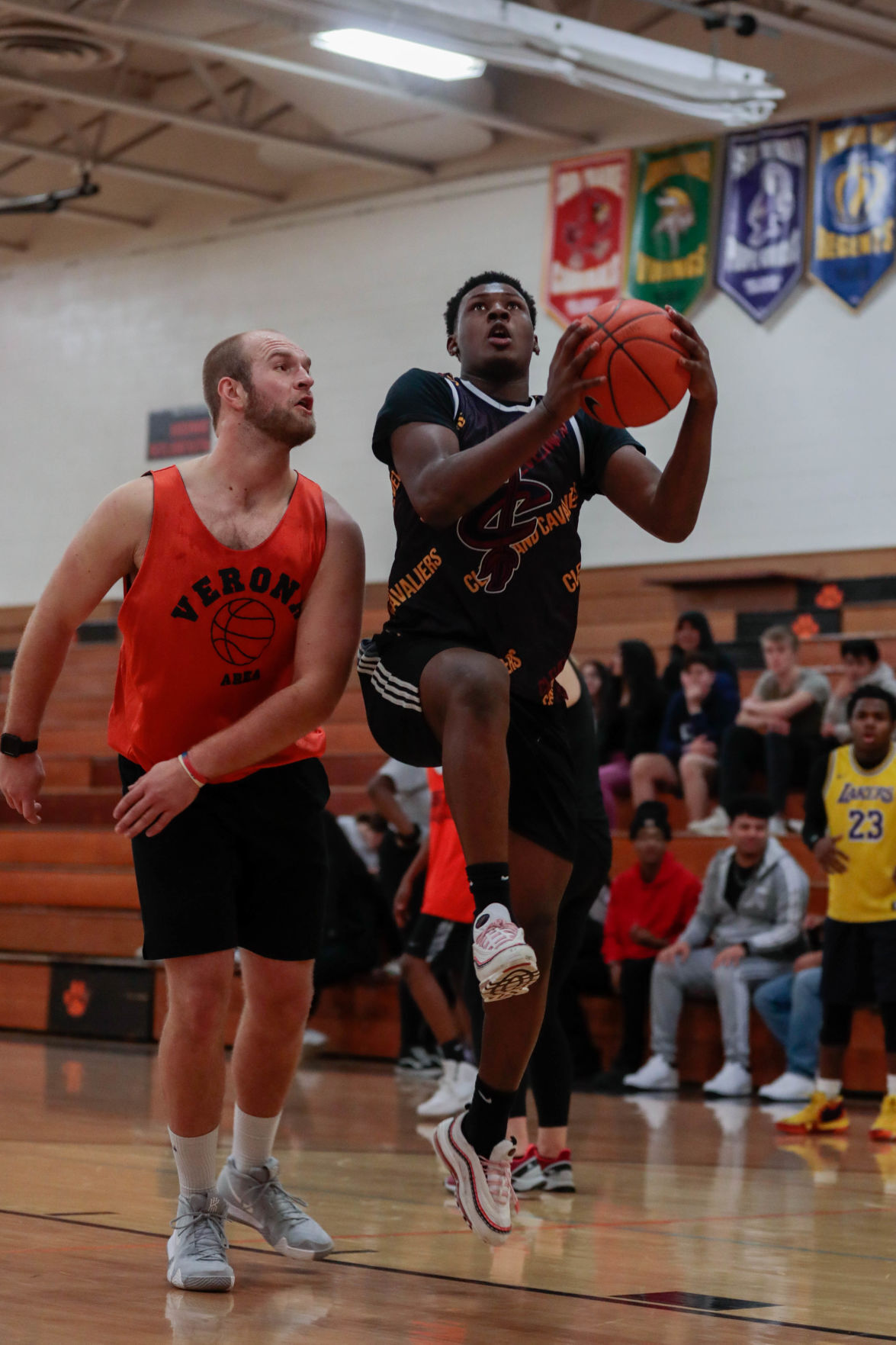 Verona Area High School student Isaiah Marsh goes for a lay-up as security assistant and student teacher Adam Stiner tries to get in his way during the March Mayhem fundraiser held March 4, 2020. Stiner, who was hired by the district in July 2019 as a security assistant, has since been promoted to a physical education teacher.

From left, Verona Area High School phy ed teacher Adam Stiner and boy’s head basketball coach and lead security assistant Reggie Patterson stand outside the school. The two both started with the Verona Area School District in July 2019 as members of the security team, but have since been promoted into new roles for the 2020-21 school year.

Center, Reggie Patterson speaks to the Verona Area High School girls’ basketball team as the assistant coach. Patterson, who was hired in July 2019 as a security assistant at the high school, was promoted to boy’s head basketball coach earlier this year.

Verona Area High School student Isaiah Marsh goes for a lay-up as security assistant and student teacher Adam Stiner tries to get in his way during the March Mayhem fundraiser held March 4, 2020. Stiner, who was hired by the district in July 2019 as a security assistant, has since been promoted to a physical education teacher.

But Saffold, interim director of safety and security for Verona Area School District, was seeking security assistants who had both a potential for growth, and a love for working with K-12 students.

Both Patterson and Stiner had those qualities – and the growth came much faster than Saffold anticipated, as the two have taken on new roles for the start of the 2020-21 school year.

Stiner, a 2014 Verona Area High School graduate, has left the security team and is now a physical education teacher at the high school; Patterson, a Mississippi native who came to Wisconsin in 2017, is the new boys head basketball coach, in addition to being the lead security assistant. Patterson’s role is set to change again, too, as he’s working on his certification to become a high school social studies teacher, through the district’s Grow Your Own program.

Patterson and Stiner were a part of a four-person team created by the district in July 2019 to help manage security at the high school. Along with Saffold and the third member, Jermero Belcher, they ensured the school was secure, intervened and mediated between students when needed and created a more positive environment.

When interviewing for the security assistant role, Patterson said he knew he had to sell himself, and all he talked about was his love for working with students, and how hard he was going to work.

“In the interview, (Saffold) had a straight face, and that straight face was telling me, ‘hey, you ain’t impressing me,’” Patterson said. “I got the call two weeks later, after that, I was excited. I told my wife that, you know, this was a job built for me.”

Stiner said it was a fun experience to go around the high school and talk to the students all day, and build a different kind of relationship with them that they’d never had before in an educational setting.

“We were someone they could talk to for 10, 15 minutes if they needed a break, and they knew that we weren’t going anywhere with it, it was between us, and we could get them back to class at the same time,” he said.

Saffold said he could see right away with Patterson and Stiner they were going to be hard workers who wanted to establish a rapport with students.

“Now, I didn’t expect these two to do it this fast,” Saffold added with a laugh.

Saffold said hearing the news of each person’s promotion brought him mixed emotions. While it means having to lose a member of his team to a different department like in Stiner’s case, or knowing that the day is quickly approaching for Patterson, Saffold said seeing the two succeed brings him joy.

“I’m extremely happy – it’s like big bro bringing their little bro (up), trying to establish and give him the skill sets, and seeing them just flourish and take off right before my eyes,” he said. “That’s what I always want to see – I want to have that bittersweet moment, where it’s more sweet than bitter.”

The face of perseverance

Growing up, Patterson was a child that couldn’t be told no.

And Patterson loved basketball – so much that even though his mother couldn’t afford to place him on the youth league team, he’d still show up to practice just to watch the others play.

“I’d be in the stands, watching, and the coaches … they would watch me watch, and they’d say, ‘Well, you’re here, you might as well come on out here and do the work,’” Patterson said.

Patterson dreamed of being a basketball player at Mississippi State University as a kid after attending a game.

When he enrolled at Mississippi State in 2015, he started as a manager for the men’s basketball team, and a year later, Patterson earned himself as a walk-on for the team.

Patterson made his way to Wisconsin after the factory he’d been working eliminated his position. He’d been staying with his older sister and brother-in-law, Patterson said, and he didn’t leave the house for weeks after being let go.

It was during the search that Patterson found a coaching position at Edgewood College, which prompted him to move to Wisconsin. From there, he went to work at Leopold Elementary, before joining the district’s security team.

District athletic director Joel Zimba said Patterson not only understands the game of basketball, but also how to meet students halfway and connect with them.

“That’s definitely one of his primary skills,” Zimba said. “He uses his journey and where he is now to motivate others.”

When Patterson got the call from Zimba about taking over as boy’s head basketball coach, he said it felt like being a 5 year old during Christmastime, where he was just anxious to get going.

“When I called people back home and let them know, everybody that I called who know me said the same exact thing: ‘Congratulations, but the job ain’t done yet,’” he said. “‘Don’t be satisfied – yeah, you’ve got that role, but don’t let this be the end of your road. Now go out and make some noise.’”

This year, Stiner became the third generation of educators in his family.

His father Brad, taught in the Belleville School District for more than 30 years, and his paternal grandfather before them was a teacher.

“It’s kind of a family thing,” he said. “Since I was a kid, I enjoyed helping others.”

After graduating from VAHS, Stiner relocated to University of North Dakota to play football, and came back to student teach in the spring of 2019.

It was during that student teaching stint that Stiner fell back in love with Verona, he said, and was received assistant coaching positions for both freshman and varsity football and girl’s track and field, with a focus on shotput and discus.

Once he came across the security assistant position, Stiner said he felt it was something he’d be good at based on his ability to connect to students as a teacher.

“I thought that’d be a cool role to get into, especially with it being a new position – you kind of get to discover how it’s going to work,” he said.

As a part of the security team, Stiner worked on creating organized log systems, where he, Patterson and Belcher could record their interactions with students, and he worked with students with special needs – skills from which he pulled from his own high school years when he was enrolled in adaptive physical education classes.

And as the “dad” of the group – per Patterson’s description – Stiner stayed at the same level, he said, when it came to managing his interactions with students, and it allowed him to have a smooth transition between his roles as a security assistant and a teacher.

And, as the district transitioned to virtual learning this fall, Stiner had the advantage of already knowing many of the students in his class, instead of having to get to know them only through a screen.

“Honestly, there’s so many skills that relate between teaching and security – the relationships, the getting to know students, the modifications, finding accommodations,” he said. “It made it easy to understand all three sides – if a teacher is having an issue, I could approach a student from a teacher’s perspective.”

If you think of the high school as a triangle, Stiner said – with the students, staff and administrators as the points – then he and Reggie, along with Saffold and Belcher, we’re to sit right in the middle.

As security assistants, Patterson and Stiner served as mediators, and were able to connect with all three parties to help resolve issues between students and staff.

“We were a vantage point for all these people,” he said. “We were able to help students if they were having a rough day – that’s a cool thing I don’t think I would have been able to experience if I was just a teacher.”

Patterson said that he easily related to high school students – especially those who came from backgrounds that were more challenging – because he took the time to get to know them.

“I’m not afraid to get to know those kids, and figure out where they come from,” he said. “My personality spoke for me, and I just let that do the work.”

Part of what helped the duo create relationships was how approachable they were, Saffold said, and being able to understand situations from a student perspective – finding common ground with them through engaging them in conversation in the halls.

But as understanding as the two were for students, they also stood their ground, Saffold added, which resulted in mutual respect.

“They came with an approach (of) ‘I’m here for you,’” he said. “They both came in with this ‘servant’ mindset, and the kids saw that, and that it wasn’t phony.”