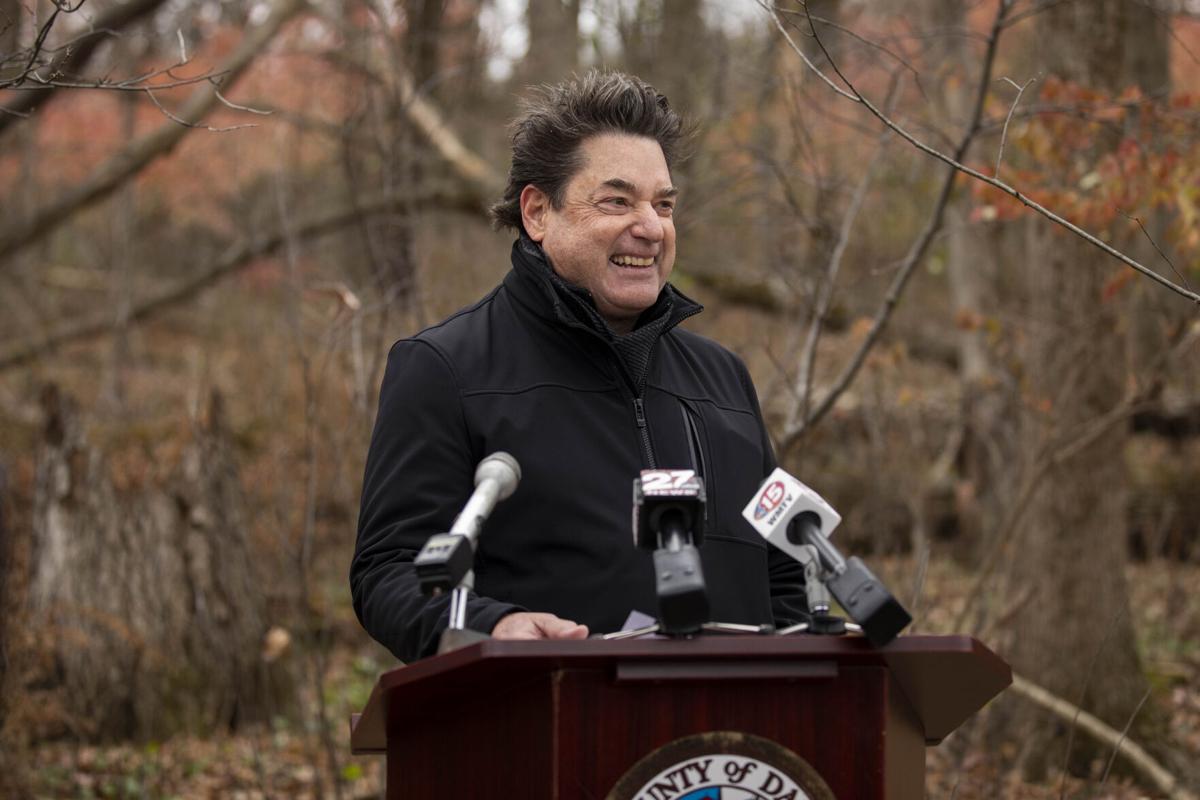 Town of Verona chair Mark Geller talks about how preserving town land has been on his wishlist as an elected official during a press conference on Thursday, Nov. 18. The press conference was hosted by Dane County and local municipalities to announce the purchase of 40 acres of land west of Woods Road for the Ice Age Trail extension and preservation. 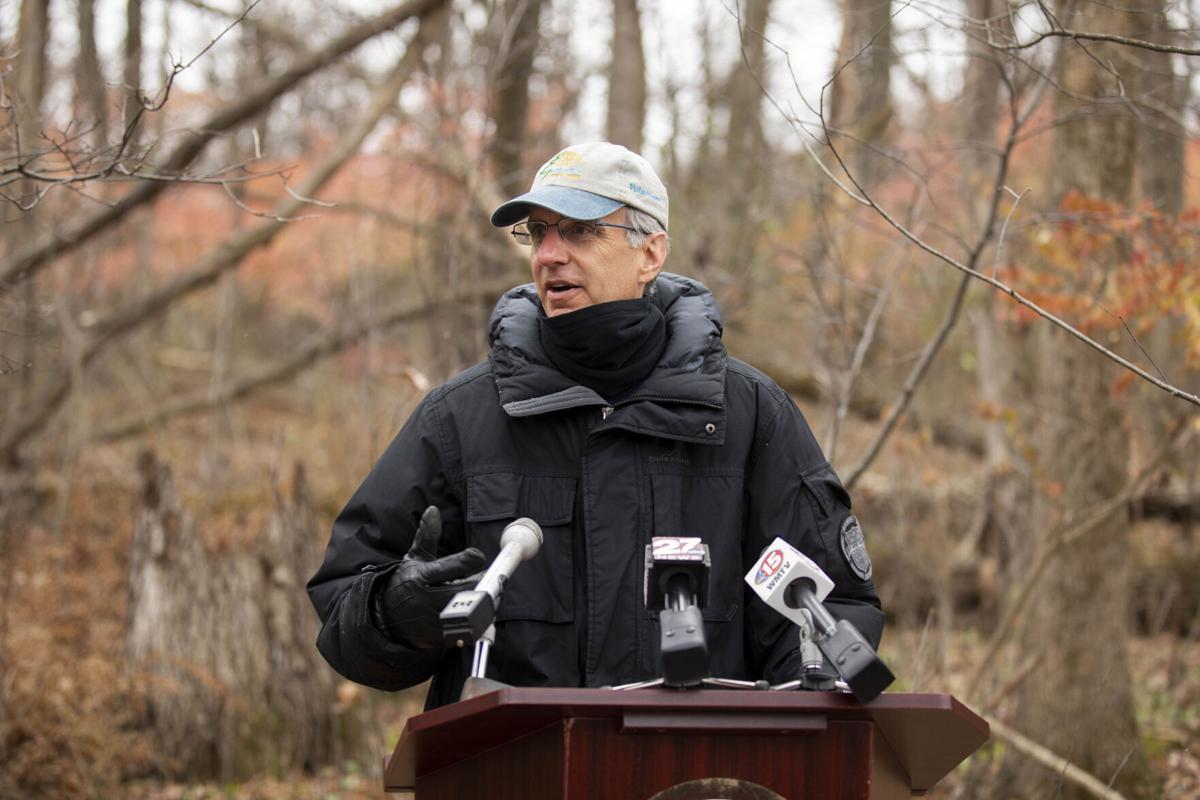 Dane County executive Joe Parisi talks about the need to preserve rural areas as Dane County continues to see the fastest growth in the state during a press conference on Thursday, Nov. 18. The press conference was hosted by Dane County and local municipalities to announce the purchase of 40 acres of land west of Woods Road for the Ice Age Trail extension and preservation. 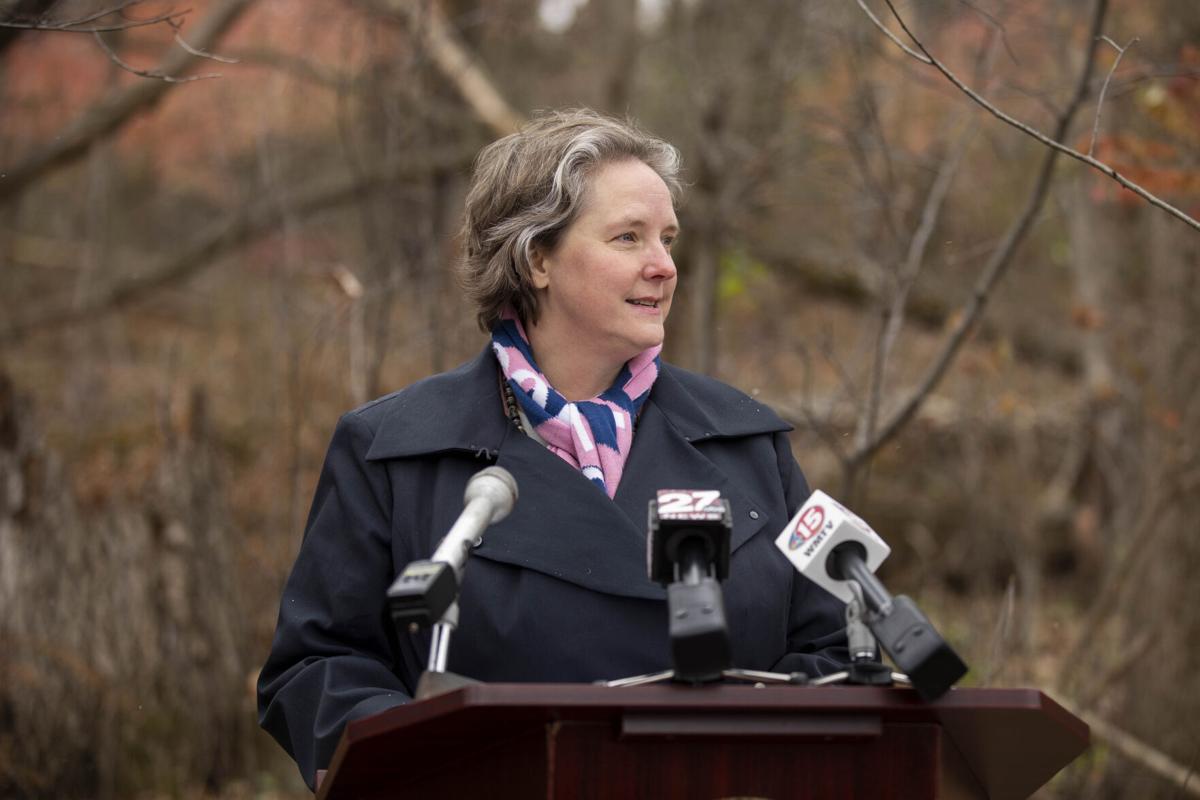 City of Madison mayor Satya Rhodes-Conway talks about the land's diverse topography during a press conference on Thursday, Nov. 18. The press conference was hosted by Dane County and local municipalities to announce the purchase of 40 acres of land west of Woods Road for the Ice Age Trail extension and preservation. 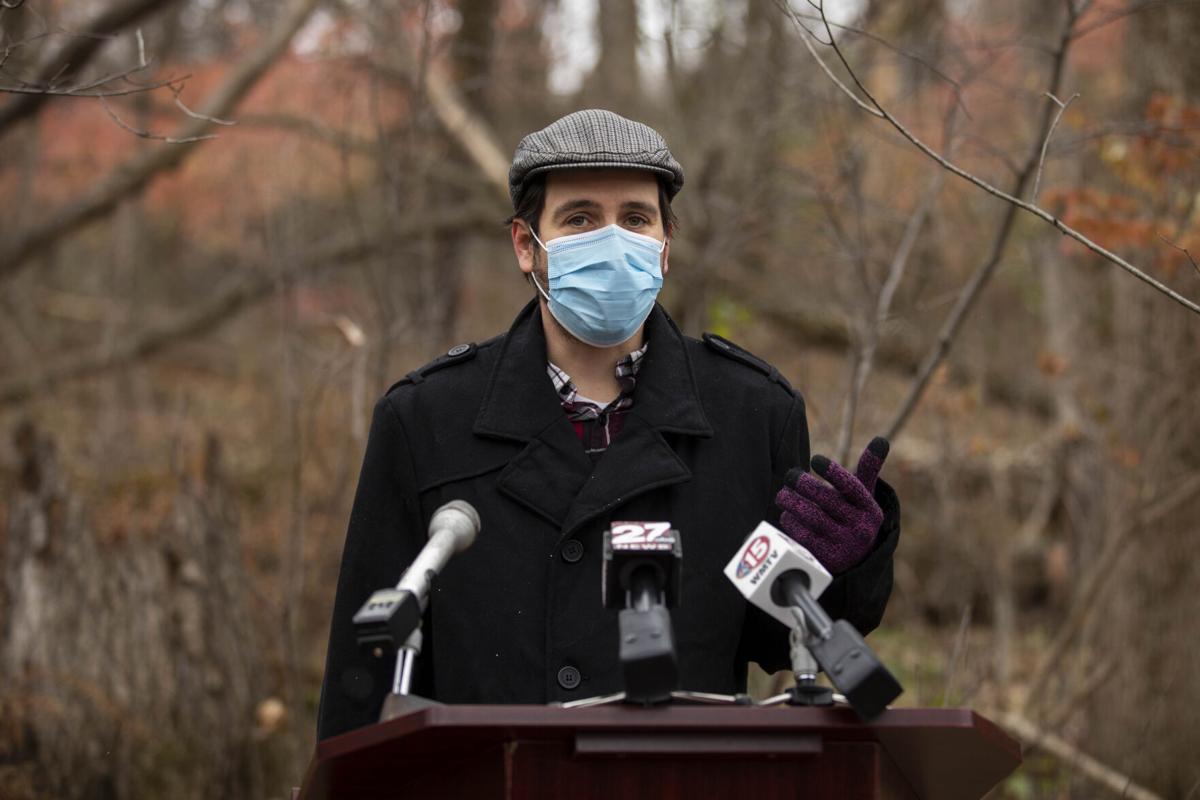 City of Verona mayor Luke Diaz talks about the importance of preserving recreational land near Verona to give residents a place to experience nature near their home during a press conference on Thursday, Nov. 18. The press conference was hosted by Dane County and local municipalities to announce the purchase of 40 acres of land west of Woods Road for the Ice Age Trail extension and preservation. 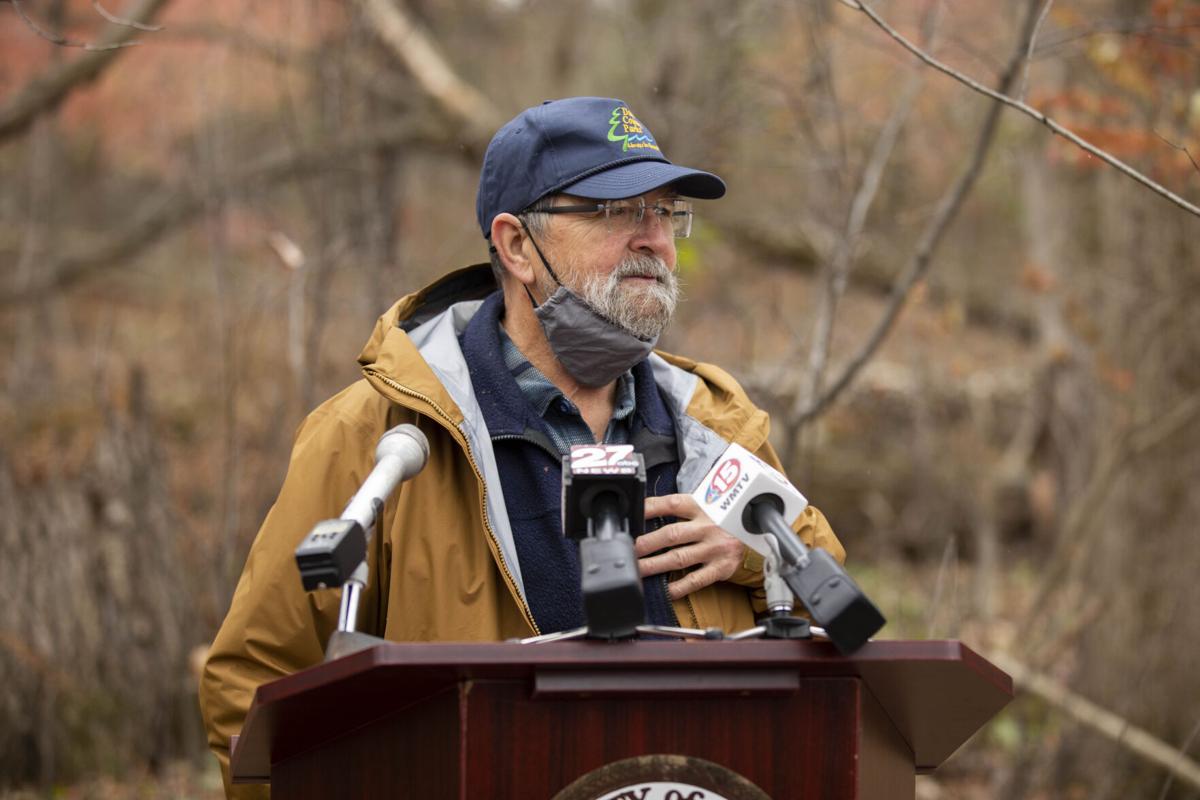 Ice Age Trail Alliance director Mike Wollner thanked government officials for their ability to work together to preserve natural land for the trail during a press conference on Thursday, Nov. 18. The press conference was hosted by Dane County and local municipalities to announce the purchase of 40 acres of land west of Woods Road for the Ice Age Trail extension and preservation.

For Town of Verona chair Mark Geller, creating connections for the Ice Age National Scenic Trail and preserving land in the town has always been on his “wishlist” as an elected official.

“It’s always a special day when dreams come true,” he said. “Number one has always been to preserve the natural and geological beauty in the township for everyone in the region to enjoy … secondly, it’s always been to work collaboratively with our regional neighbors and county … with the intent of planning for future land use and preservational land for the benefit of generations to come.

“And my third wish has always been if we could ever pull this off, that we would gather on a beautiful, warm, sunny day in the township,” Geller added as light snowflakes drifted down from the cloud cover above the trees on a parcel of land just off of Woods Road on Thursday, Nov. 18. “But hey, two out of three ain’t bad.”

Geller, alongside other elected officials from the county and cities of Verona and Madison, spoke from the wooded area just off Woods Road on the town’s northwest side to announce the county’s purchase of 40 acres of land that will be preserved and used to expand the Ice Age Trail. The parcel of land sits just south of a similar-sized City of Madison parcel of land that will also be used for trail expansion, and across the road from University Ridge Golf Course, where the Ice Age Trail currently weaves through it and across Hwy. M down into Verona.

The Ice Age National Scenic Trail is one of 11 federally recognized trails, and runs from the Interstate Park on the border of Minnesota and Wisconsin down to Dane County and back north to the Potawatomi State Park alongside Lake Michigan. The trail, which runs for more than 1,000 miles, follows the edge of the last continental glacier in the state 10,000 years ago.

The land purchase is being done under a partnership between the county and the three local municipalities, with the county contributing the most at $1.6 million of the overall $2.7 million price tag, a news release from the county stated. Madison will pay another $540,000 and annex the northern 20% of the land.

The remaining 80% of the land will stay under county ownership, and the City of Verona will hold a trail and conservation easement on the county’s portion in return for providing $500,000 toward the purchase, the release states. Town of Verona will provide maintenance services toward the property such as mowing and snow plowing.

In May, the county board approved the purchase of 20 acres of Town of Verona land just west of Reddan Park and the Ice Age Trail, with the intent being to create a buffer between homes on Enterprise Drive and the soccer complex to provide a future gateway to the trail and provide an alternate location for the Badger Prairie Community Gardens. As part of that land purchase, the agreement between owner Karen Godshall gave the county first dibs on an additional 80 acres to the north that extends up to McKee Road.

During the press conference, Dane County executive Joe Parisi said people have plenty of examples to look to where they can see the government not working together, but said the partnership to purchase and preserve the land off of Woods Road is not one of them.

“This is an example of how government can, and does, and is working together in Dane County,” he said. “This is people coming together in the best interest of the people in our community, in our region.”

And while Dane County is the fastest growing county in the state, Parisi added, there’s a need for governments to preserve natural areas while they still exist.

“They’re not any more of this,” he said, gesturing toward the trees behind him. “If we don’t save it now, once it’s gone, it’s gone forever.”

Ice Age Trail executive director/CEO Mike Wollmer said during the press conference he was part of the process in the early 1980s of planning the Ice Age Trail after Congress was approved. Wollner said he remembered some people had wanted to avoid the kettle moraine altogether because of the metropolitan development that was already happening that would make planning more difficult.

Wollner added that while they knew it was going to be a challenge to plan the trail with how it was placed geographically, he said he’s thankful to have local elected officials who have been dedicated to make sure it could connect through land preservation efforts.

“The Ice Age National Scenic Trail … can take you to some of the wildest places in Wisconsin, but it can also, if it’s located as it is here, provide access for people literally from outside their back doors, practically, to connect with nature,” Wollner said. “In some senses, you could say we’re at the heart of the trail. And I think the kind of collaboration that’s being embodied today is at the heart of this whole project, and what it’s all about.”

Verona wrapping up new path, sewer interceptor project that’s been in works for a year

The project that has cleared a two-mile long path by the Ice Age Trail over the past year is wrapping up soon, with a new multiuse path paved and the Lincoln Street bridge open for traffic again.

Ice Age Trail Alliance is one of nearly a dozen recipients to get Dane County grant funds to assist with the maintenance and promotion of the trail.

The land will serve as a buffer between Reddan Soccer Park and homes on or near Enterprise Drive, and serve as an alternate space for the Badger Prairie Community Garden.