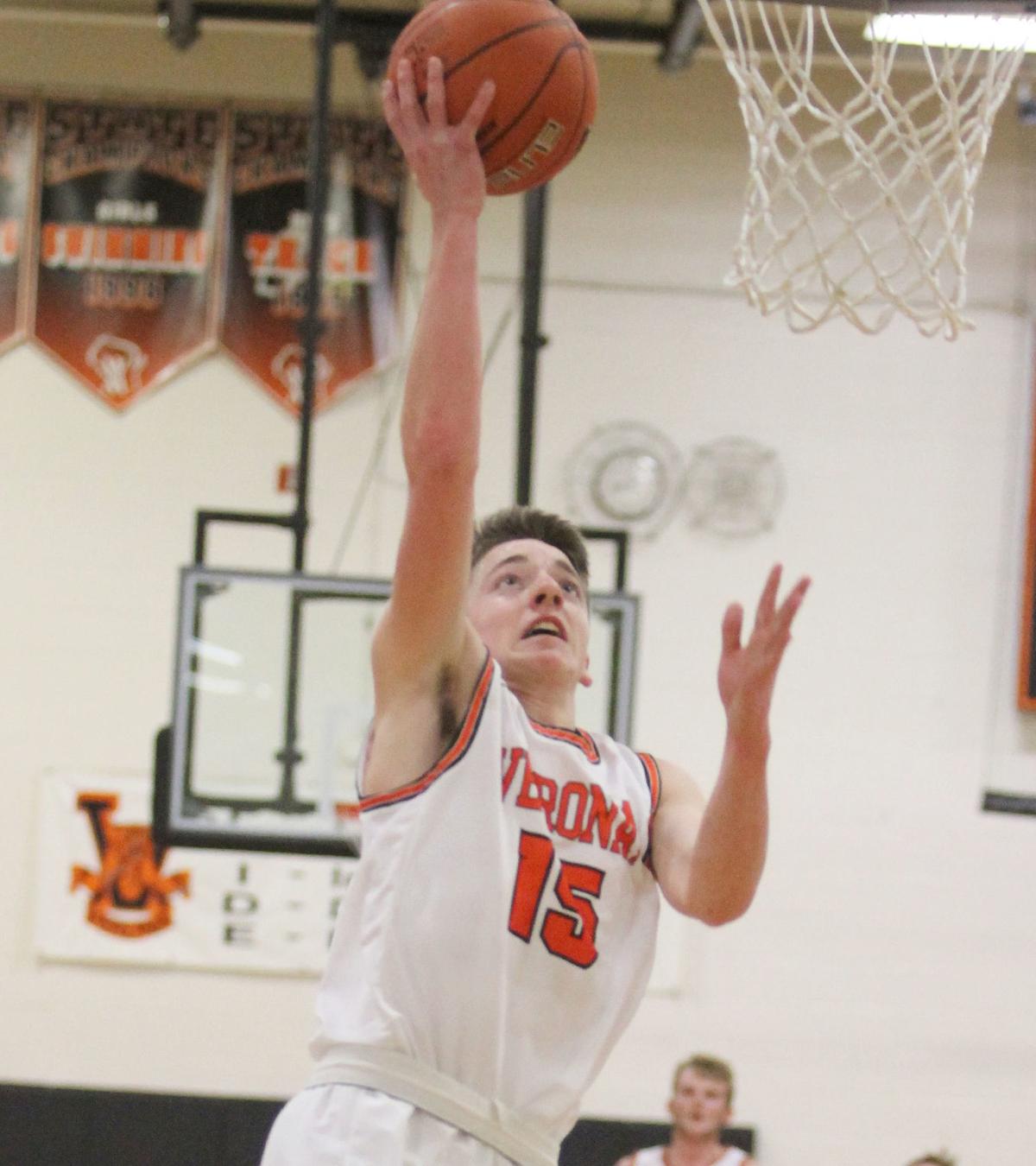 Verona junior Jake Poller goes up for a layup during the second half against Oconomowoc on Saturday, Dec. 21, in Verona. He scored 10 points off the bench in the Wildcats’ 69-52 loss. 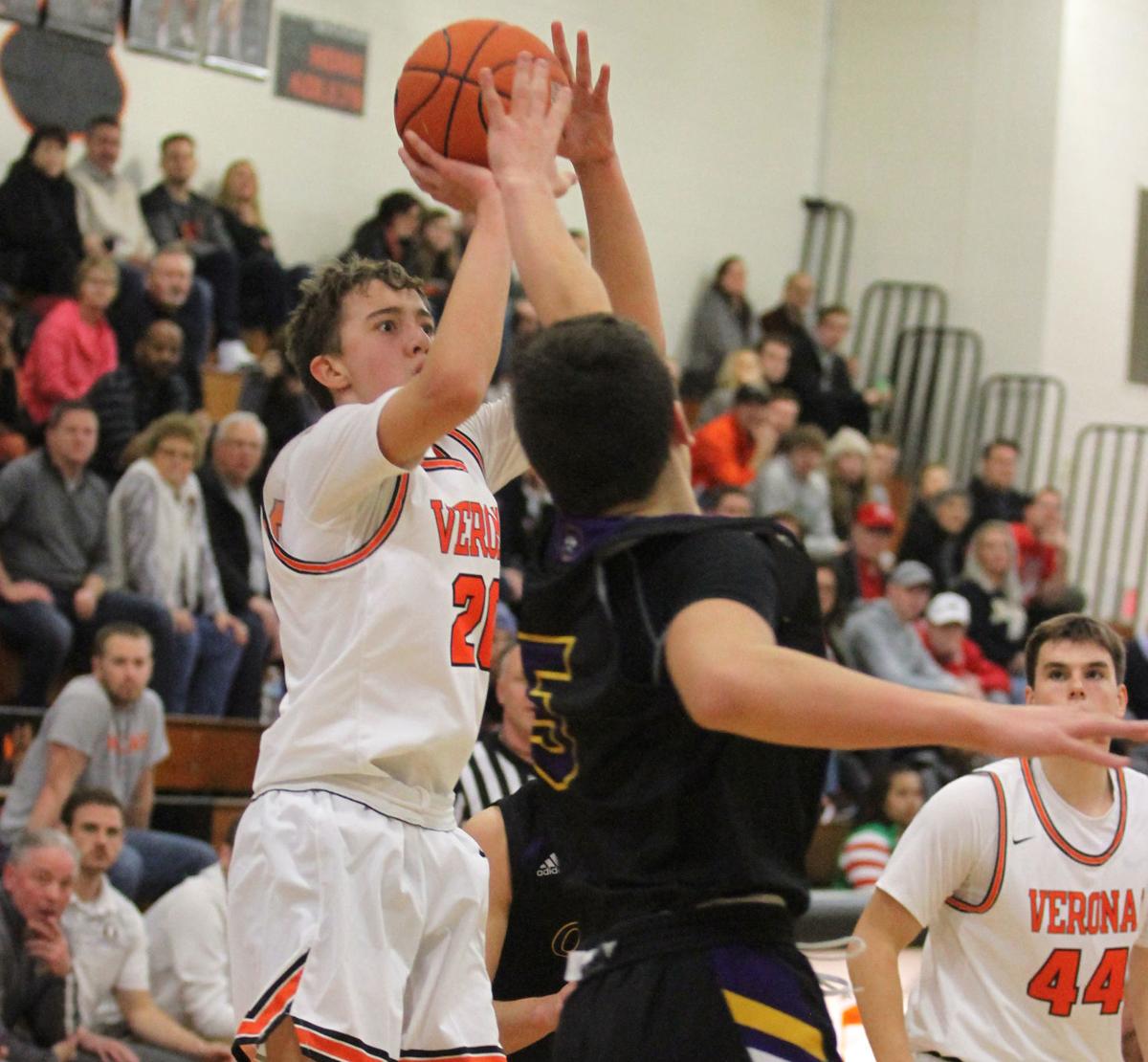 Verona junior Jake Poller goes up for a layup during the second half against Oconomowoc on Saturday, Dec. 21, in Verona. He scored 10 points off the bench in the Wildcats’ 69-52 loss.

Through the first five games of the season, the Verona boys basketball team has been a second-half team.

The case was never more evident than Friday, Dec. 20, when the Wildcats stormed back from a 19-point deficit to beat Madison West 79-73 in overtime in a Big Eight Conference home game.

The Wildcats fell to nonconference foe Oconomowoc 69-52 at home a day later, and the loss may have come at a cost. Senior guard Haakon Anderson injured his ankle in the second half and was forced out of the game. He was on crutches after the game.

“It’s hard to replace a guy like Haakon,” Verona coach Eddie Singleton said. “He can play five positions on the floor. He’s the leading rebounder in the Big Eight right now and averaging 16 points per game. There is a huge dropoff when the captain of your team and the leading rebounder of the conference is not playing, but guys have to step up.”

Senior forward Malik Odetunde gave the Wildcats a spark with a team-high 12 points off the bench, but Oconomowoc went on a second-half run to knock off the Wildcats

“That was the best first half of basketball we have played,” Singleton said. “As you know we have been a second-half, comeback team so far this season. I thought the game would have quite a turn in the second half because we are taking the progression into the right step of becoming a consistently successful team.”

Oconomowoc senior guard Drew Fisher scored a game-high 25 points. He scored 11 points in the Raccoons’ 15-8 start to the game. Odetunde came in and scored six straight points to help the Wildcats mount a comeback. Verona (2-3, 2-2 Big Eight) switched to a press and closed the half with a 7-1 spurt to cut the Raccoons’ lead to 34-28 at intermission.

“He’s definitely a spark plug for us and it can be on defense or offense,” Singleton said of Odetunde. “He’s thriving in that sixth man role right now. Hats off to him because it’s starting to click for him two games in a row.”

The Raccoons went on a 19-8 run in the second half, and Verona trailed by as many as 27 points.

“They came out tougher,” Odetunde said. “They got the loose balls and rebounds more. They just bodied us more and we were playing kind of soft. I just feel like we can get better on defense, and if we do that, we can compete against any team.”

The Wildcats outscored the Regents 11-5 in the extra period to edge the Regents.

Verona rallied from a 19-point deficit with a 34-point second half. Jonah Anderson scored five of his six points in the extra session.

West’s Dayne Armwald also scored 24 points. Verona made nearly as many free throws (18) as the Regents attempted (19) and finished 18-for-34 from the charity stripe.