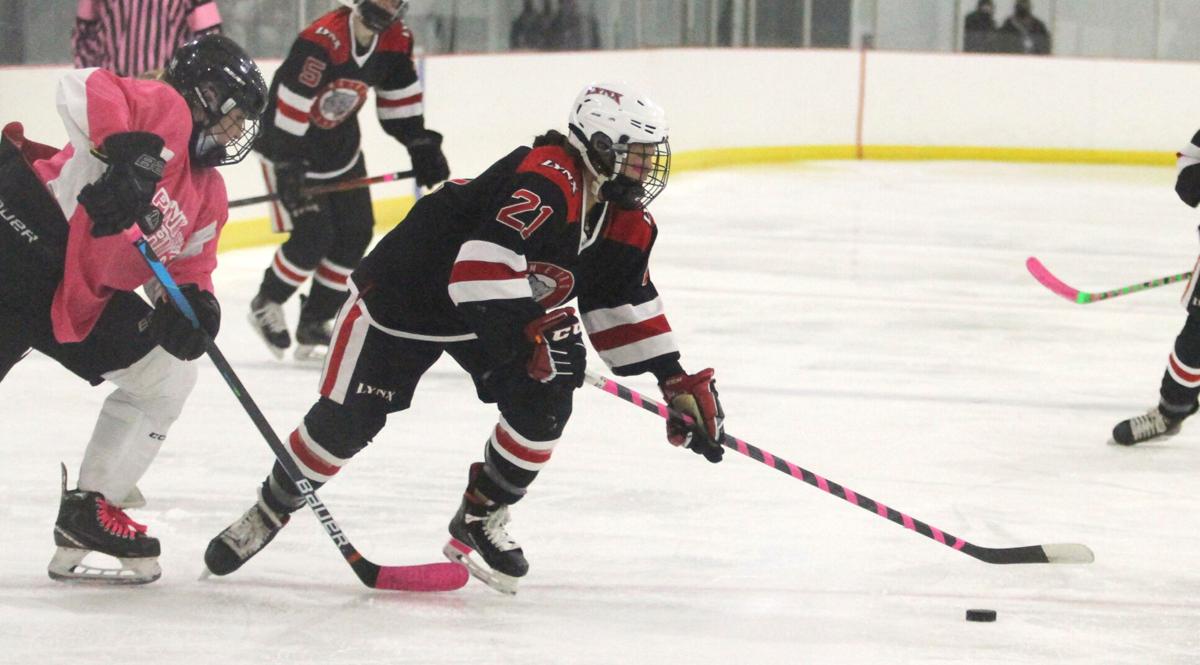 Madison Metro Lynx senior forward Kaya Byce scores a goal in the second period in a 4-1 win over the Stoughton co-op on Saturday, Jan. 8, at the Mandt Community Center. 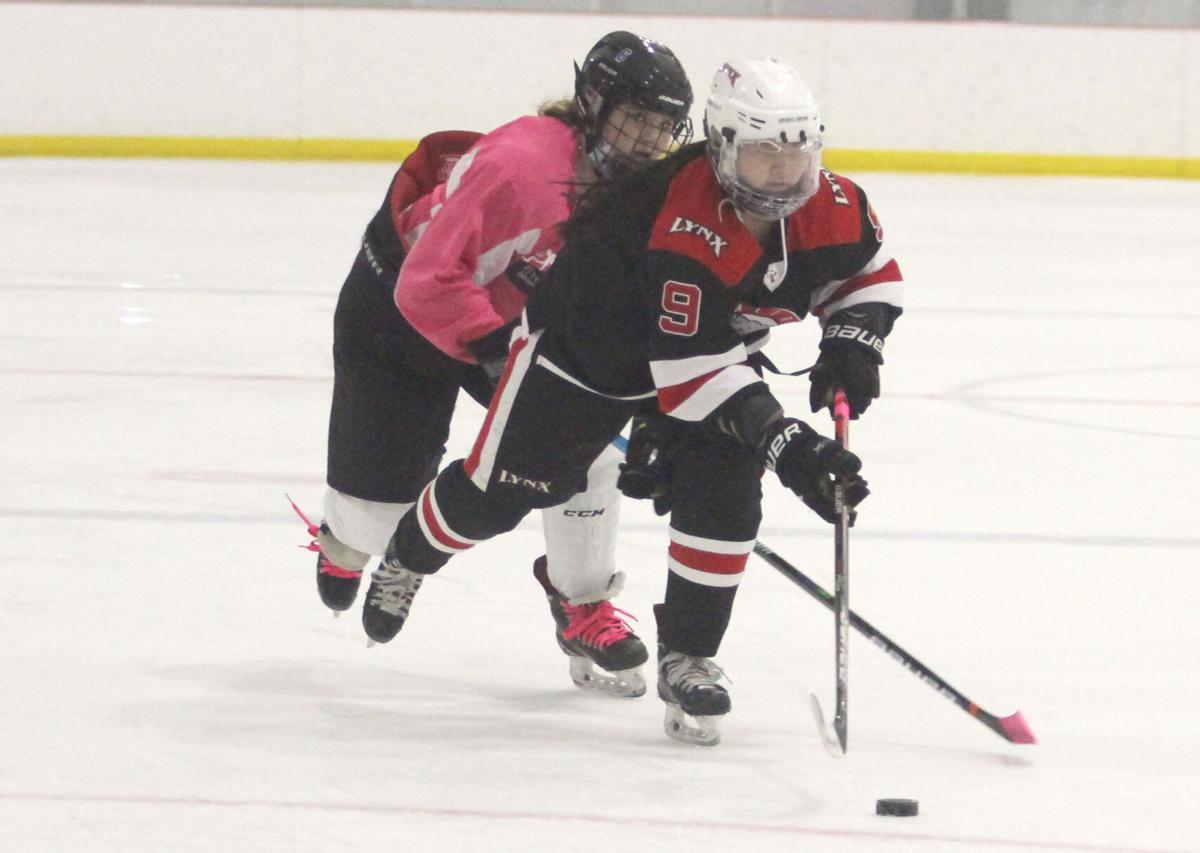 Madison Metro Lynx senior forward Kaya Byce scores a goal in the second period in a 4-1 win over the Stoughton co-op on Saturday, Jan. 8, at the Mandt Community Center.

Verona senior forward Rachel Mirwald returned to the ice for the first time in a month after a knee injury and the Madison Metro Lynx pulled away in the third period to beat the Stoughton co-op 4-1 on Saturday, Jan. 8, at the Mandt Community Center.

Metro Lynx coach Kathryn Anderson said getting Mirwald and several players back from illness was a big lift.

“Everything is right in the world again with Rachel out there,” Anderson said. “We are happy to have her back. She didn’t miss a beat.”

The Metro Lynx (12-1, 5-0 Badger Conference), ranked fifth in the Division 1 Wisconsin Prep Hockey state poll, controls its own destiny in the hunt for a conference championship. It marks the second time this season the Metro Lynx have beaten the Icebergs.

The Metro Lynx were coming off a 10-0 road win over Beaver Dam Tuesday, Jan. 5.

The Lynx play two conference games against the Badger Lightning this week. The Lynx are scheduled to play the Badger Lightning on Thursday, Jan. 13, at the Sauk Prairie Ice Arena and then will host the Lightning on Saturday, Jan. 15. Then after a three-game week, the Metro Lynx will play Bay Area on Jan. 28, at the Cornerstone Ice Center in De Pere and the top-ranked Fox Cities Stars on Jan. 29, at the Tri-County Ice Arena in Neenah.

“They are really excited for that weekend,” Anderson said. “These girls love a challenge and they are not afraid of it.”

Senior forward Kaya Byce scored two goals to lead the Metro Lynx to a Badger Conference win over the Icebergs Jan. 8, at the Mandt Community Center in Stoughton.

“Having all of our lines back together was really nice,” Byce said. “We knew this was a big conference game for us. We just needed to win this one.”

The Metro Lynx led 2-1 after two periods. The Lynx scored two goals in the third period to seal the victory.

“Kaya is a very strong leader,” Anderson said. “She leads this team by example and doesn’t quit. She’s not leaving anything on the ice.”

The Metro Lynx outshot the Icebergs 38-24. However, the Stoughton co-op struck first when Jenna Klonsinski scored at 6 minutes, 21 seconds in the first period. It only took nine seconds later for Madison’s Rachel Jasinski to score an equalizer on an assist by Stebbeds.

“We knew that this game would not be like the first game at the beginning of the season when we met,” Anderson said. “Lines were definitely mixed up. They are such a strong team that it doesn’t matter. This team loves to answer back and they did that very well.”

Byce scored her first goal at the 5:20 mark of the second period after the puck bounced off her knee and she controlled it before firing it in the back of the net to give the Lynx a 2-1 lead.

“It was just a really funky bounce off my knee and popped down to my strike and I was just like I have to shoot to score,” Byce said. “It was pretty fortunate, but we really needed one.”

Anderson said the communication between the defensive, neutral and offensive zones really improved in the second period.

“They made sure they were getting open and pressing on them,” Anderson said. “They were just small details these girls know are important and they took those to heart.”

Sophomore defenseman Rowan Severson (Mount Horeb) scored on an assist by junior defenseman Grace Bonnell at 9:47 in the third period to extend the lead to 3-1. Byce scored the final goal on a power play on a pass by Stebbeds at 14:22.

The Metro Lynx erupted for six goals in the first period. Steinmetz put the Lynx on the board first with a goal at 11:31. Waxenberg scored a minute later on an assist by Faulkner. Byce scored on assists from Lake and Naomi Held at 13:39 to give the Lynx a 3-0 lead. Jacobson scored her first goal on passes from Stebbeds and Faulkner at 14:18. It only took another 24 seconds for Jacobson to find the back of the net to give the Lynx a commanding 5-0 lead. Byce scored her second goal on an assist by Steinmetz at 15:22.

Madison got second-period goals from Stebbeds and Lake. In the third period, Jacobson scored her third goal and Faulkner scored on assists from Waxenberg and Steinmetz.

The Metro Lynx outshot the Golden Beavers 23-6. Bonnell got the start at goaltender and she made six saves.