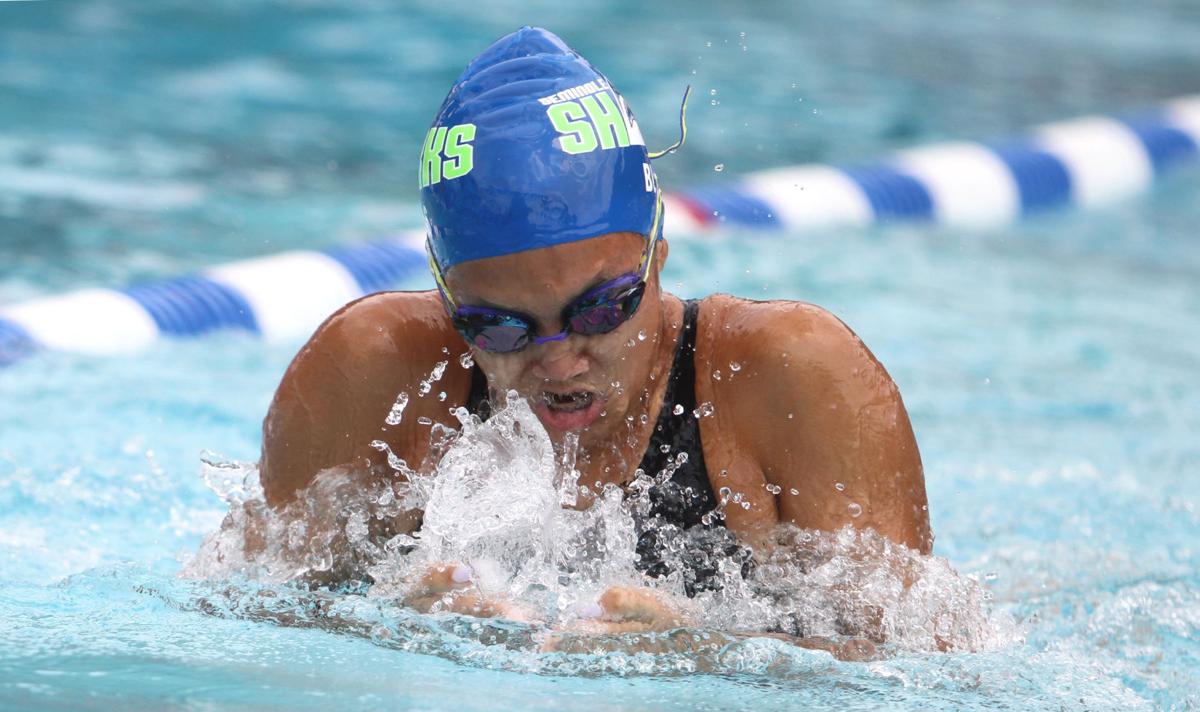 Verona senior Maia Blas swims the 100-meter breaststroke in the Madison All-City Swimming Championships on Saturday, July 31, at the Seminole Pool in Fitchburg.

Verona senior Kenzie Zuehl swims the 100-meter freestyle during the Madison All-City Championships on Saturday, July 31, at the Seminole Pool in Fitchburg. Seminole finished third place as a team.

Verona senior Maia Blas swims the 100-meter breaststroke in the Madison All-City Swimming Championships on Saturday, July 31, at the Seminole Pool in Fitchburg.

Verona senior Kenzie Zuehl swims the 100-meter freestyle during the Madison All-City Championships on Saturday, July 31, at the Seminole Pool in Fitchburg. Seminole finished third place as a team.

The collection of talent in the pool for the Madison All-City Swimming Championships on Saturday, July 31, at Seminole Pool in Fitchburg, featured several of the top swimmers for Verona Area/Mount Horeb and a trio of Division I college commits.

Yet, 10-year-old Emmie Goodavish had a historic performance that may never be replicated. Goodavish won the 50-meter breaststroke in 42.54 seconds to break the All-City record even though Seminole is the only pool that is 26.5-meters. That came one day after Goodavish broke the All-City yards record at Maple Bluff. She also took second in the 50 freestyle (32.30).

“A swimmer has never had the opportunity to break multiple All-City records in the same event in the same year prior to 2021,” Ridgewood coach Bill Wuerger said. “Normally the meet is held at one site, but this year it was divided up into six sites with different length pools.”

A trio of Division I collegiate swimmers highlighted the meet with Anna te Duits, an Edgewood senior and University of Wisconsin-Madison commit swimming for Nakoma; Edgewood senior teammate Abby Reid, who also committed to the Badgers a month ago and Madison West 2021 graduate Bridget Sullivan, a UNLV commit, who was competing with Shorewood Hills.

Blas said she wanted to focus this summer on events she usually doesn’t swim.

Blas swims for Seminole and the Madison Aquatics Club in the summer. She sees the rewards from finetuning her strokes with two club teams.

“It helps me enjoy swimming because it’s a lot of fun and it helps keep me in shape,” Blas said. “If I get tired, Seminole helps keep me refreshed and it makes me love swimming even more.”

Zuehl always looks forward to the All-City meet. It’s not only the competition, but the camaraderie.

“I love the community coming together and I love to dress up,” she said. “This summer my goal was just to have fun.”

Zuehl has been swimming a lot of freestyle events and said this year she decided to switch it up and swim breaststroke.

During the high school season, Zuehl will be the Wildcats’ top sprinter in the 50 and 100 free, but she’s open to swimming in any event.

“I will do whatever the team needs,” she said. “I think we will be even stronger this year. We have some really good freshmen coming on and a great group returning.”

Ridgewood won the All-City Championships after racking up 2,746 points to outdistance Middelton (2,124) in the 13-team field. Seminole took third (2,103). Ridgewood captured the title for the second straight season. They also won in 2019, but there was no All-City meet last summer because of the COVID-19 pandemic. Ridgewood has won 23 of the past 26 All-CIty championships, including a 14-year title run from 1995-2008.

“Jillian is one of the top incoming high school freshmen in the state,” Wuerger said. “We’re glad she chose to compete at All-City this year. The Wisconsin Club State Meet was held in Pleasant Prairie the same weekend.”

Zuehl is in her third year as a junior coach for the 11-12 age group.

“I see myself making very similar mistakes that the younger kids do too,” Zuehl said. “When I explain it to them it helps my understanding also.”