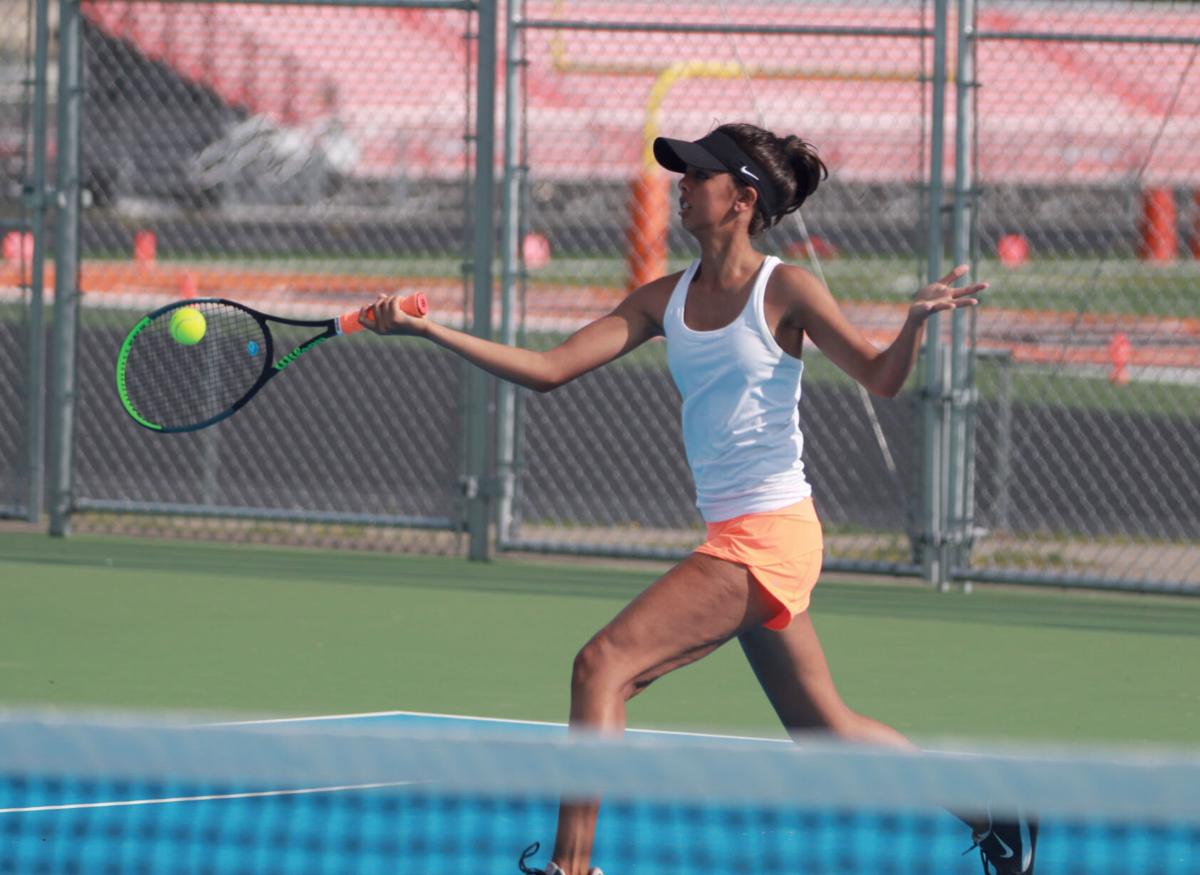 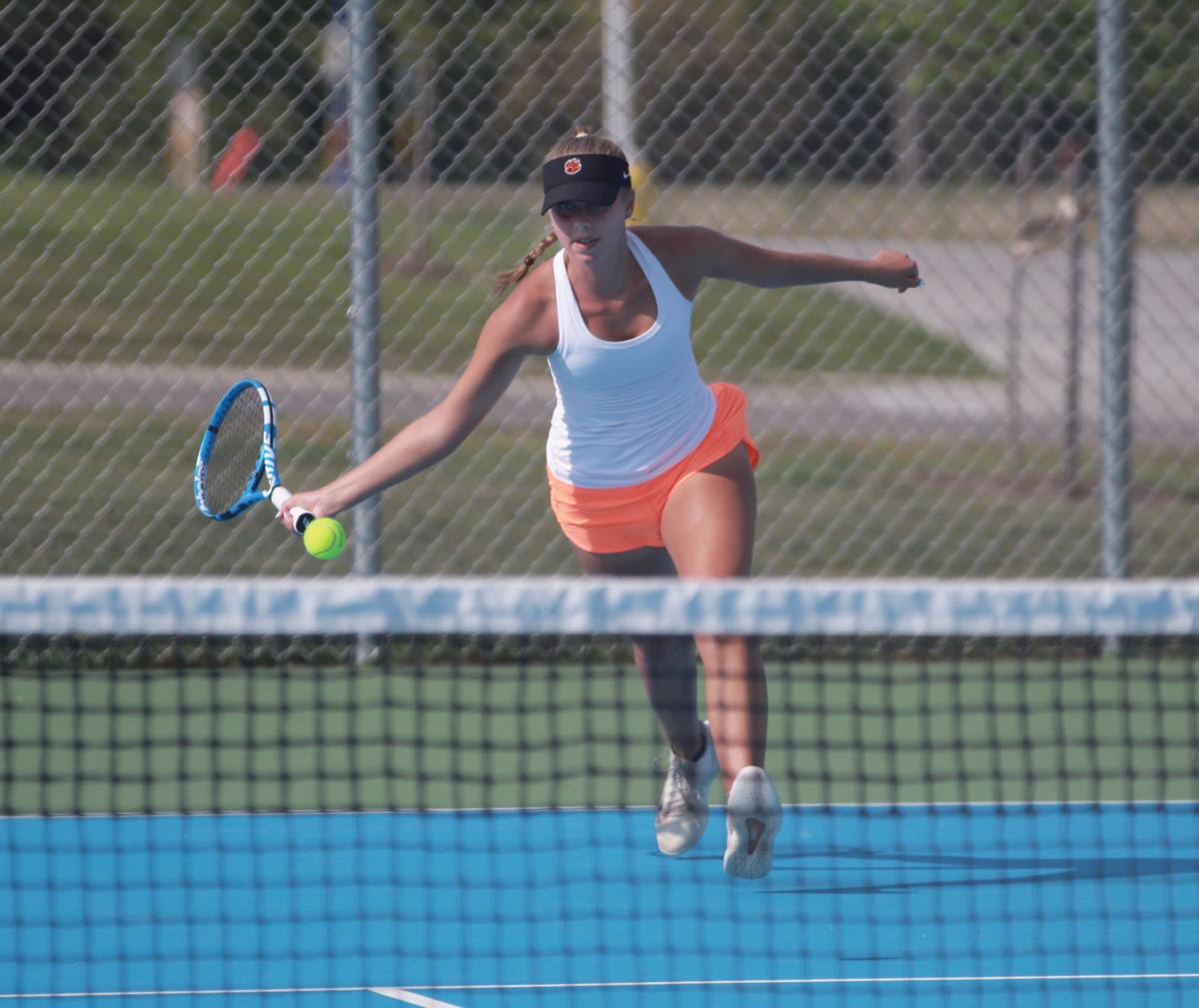 Verona’s Samantha Breitbach runs to a shot during a Big Eight Conference dual against Sun Prairie East Thursday, Aug. 19, in Verona. Breitbach won at No. 2 singles 6-0, 6-1. 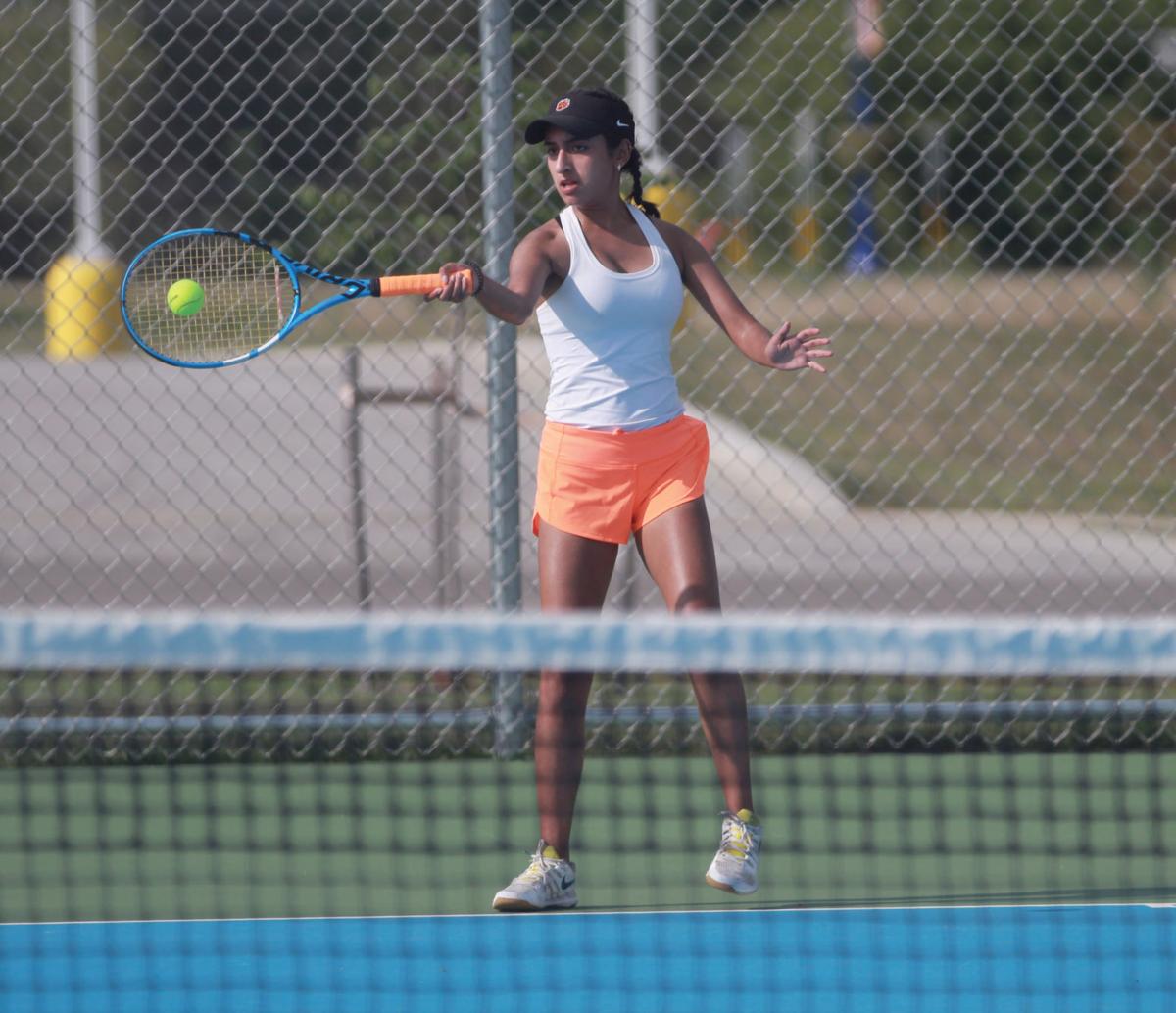 Verona’s Zoe Qureshi connects on a shot during a Big Eight Conference dual against Sun Prairie East Thursday, Aug. 19, in Verona. Qureshi won 6-0, 6-1 at No. 3 singles. 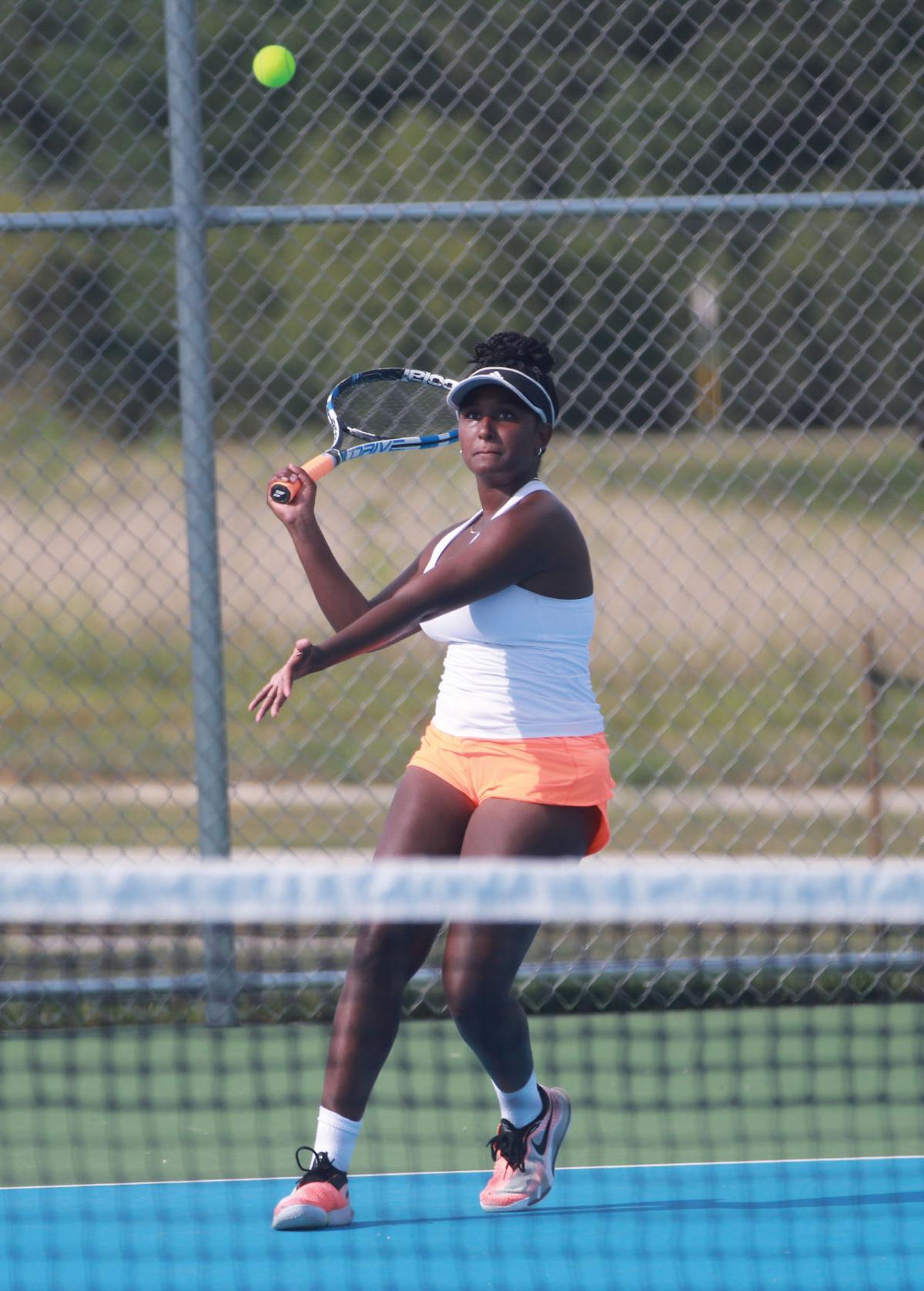 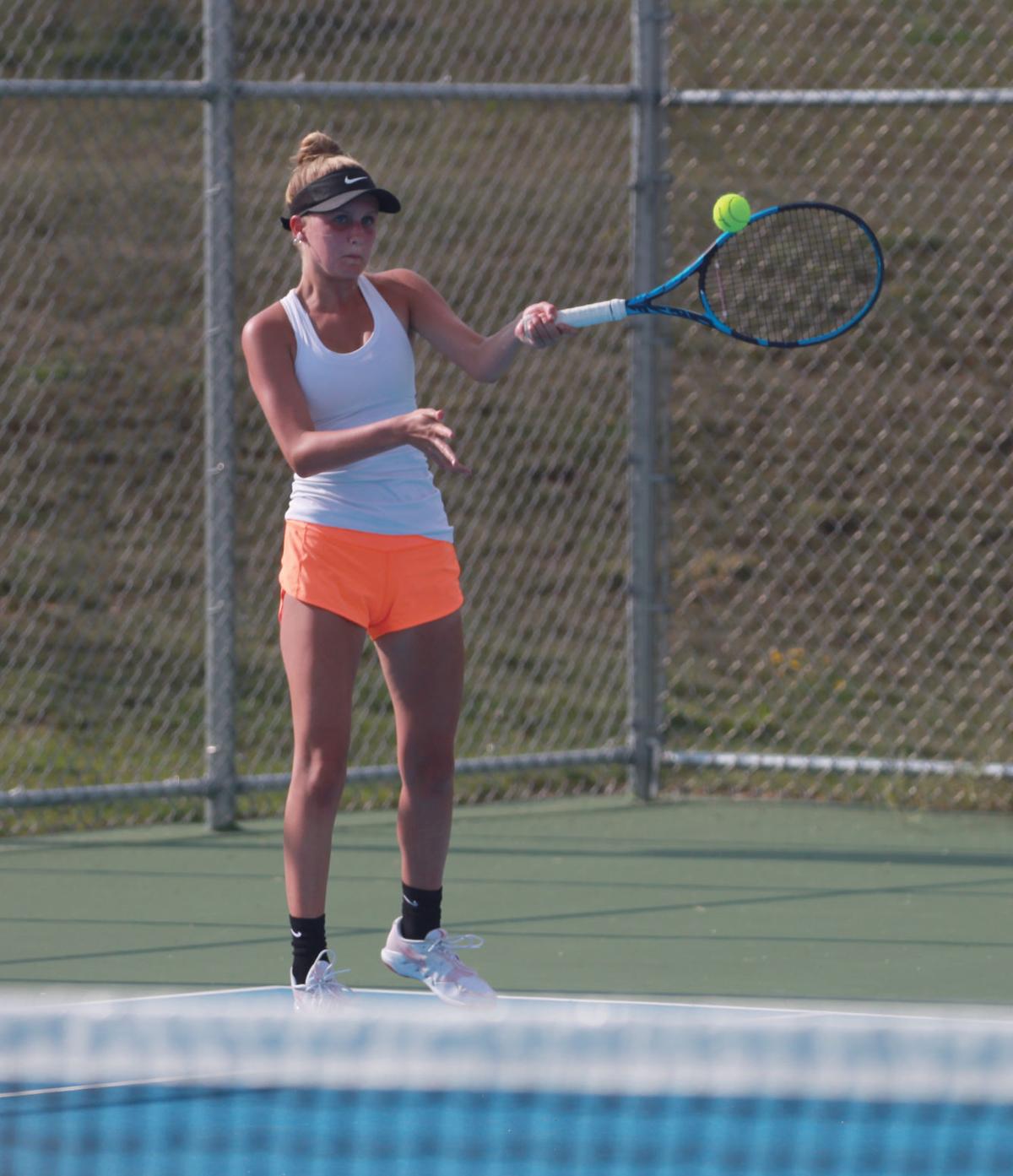 Verona’s Samantha Breitbach runs to a shot during a Big Eight Conference dual against Sun Prairie East Thursday, Aug. 19, in Verona. Breitbach won at No. 2 singles 6-0, 6-1.

Verona’s Zoe Qureshi connects on a shot during a Big Eight Conference dual against Sun Prairie East Thursday, Aug. 19, in Verona. Qureshi won 6-0, 6-1 at No. 3 singles.

The Wildcats — along with Middleton, Nicolet and Kettle Moraine — went 3-1 in the two-day challenge. Whitefish Bay was the only team to go a perfect 4-0 out of the 12 teams that competed.

“We played five matches in basically 90 plus heat-index conditions,” Verona head coach Mark Happel said. “Not one of our girls said a thing about it. They just went out and played. I think that’s going to bode well as we get in more and more tournaments throughout the year, just our mental toughness.”

Following the weekend of action, Verona earned the No. 4 state ranking in Division 1 by the Wisconsin High School Tennis Coaches Association.

Verona swept Oak Creek 7-0, but also picked up its first loss of the season with a 4-3 defeat to Kettle Moraine on Saturday. .

With the victories on Saturday, Nagpal moved to 9-0 on the season, with all of her matches taking only two sets.

“She does everything well,” Happel said. “For a freshman she is so mentally tough and has all the strokes, all the shots. She can play from the baseline she can get to the net. She’s just a fantastic player, always working on her game trying to get better every day.”

The Wildcats were unable to earn a doubles win against Kettle Moraine.

“We’ve run into some teams whose strengths has been their doubles lineup,” Happel said. “Every team is built differently, this weekend we ran into some juggernaut doubles teams. There are definitely going to be times this year that our doubles are going to get some big quality wins for us — and they already have.”

The Wildcats beat Madison Memorial 5-2 in a Big Eight Conference dual — while edging both Arrowhead and Homestead by scores of 4-3 in the I-94 Challenge.

Nagpal won all three of Friday’s matches in straight sets, dropping just 10 games in the process. Nagpal’s closest match of the day came in a 6-3, 6-2 victory against Madison Memorial’s Sophia Jiang.

Breitbach won one match at No. 2 singles. At No. 3 singles, Qureshi won all three of her matches. Qureshi earned a 6-4, 4-6, 10-7 win against Homestead’s Elsa Heinrich.

Queoff lost just seven games at No. 3 singles on her way to a 3-0 day.

For the entire I-94 Challenge, the Wildcats’ singles flights went a combined 13-3.

“I think playing all these strong teams showed us where we’re at right now, but I hope we realize we need to get better at stuff too,” Happel said.

All seven of the Wildcats’ flights won in straight sets as Verona swept past Sun Prairie, 7-0, in a Big Eight Conference opener on Thursday, Aug. 19, at Verona Area High School.

At the top singles fight, Nagpal did not drop a single game as the freshman topped Sun Prairie’s Grace Kramschuster 6-0, 6-0. Breitbach (No. 2 singles) and Qureshi (No. 3 singles) both won their respective flights for Verona by scores of 6-0, 6-1. At No. 4 singles, Queoff swept Mairin Leary 6-0, 6-0.

Huseth and Kreuser teamed up for a 7-5, 6-2 win over Sun Prairie’s Reagan Schwartzer and Alexandra Stein at the top doubles flight. Chavez-Lazaro and Witkowski (No. 2 doubles), along with Annie Nick and Erin Nick (No. 3 doubles) were triumphant in their matches by scores of 6-1, 6-1.