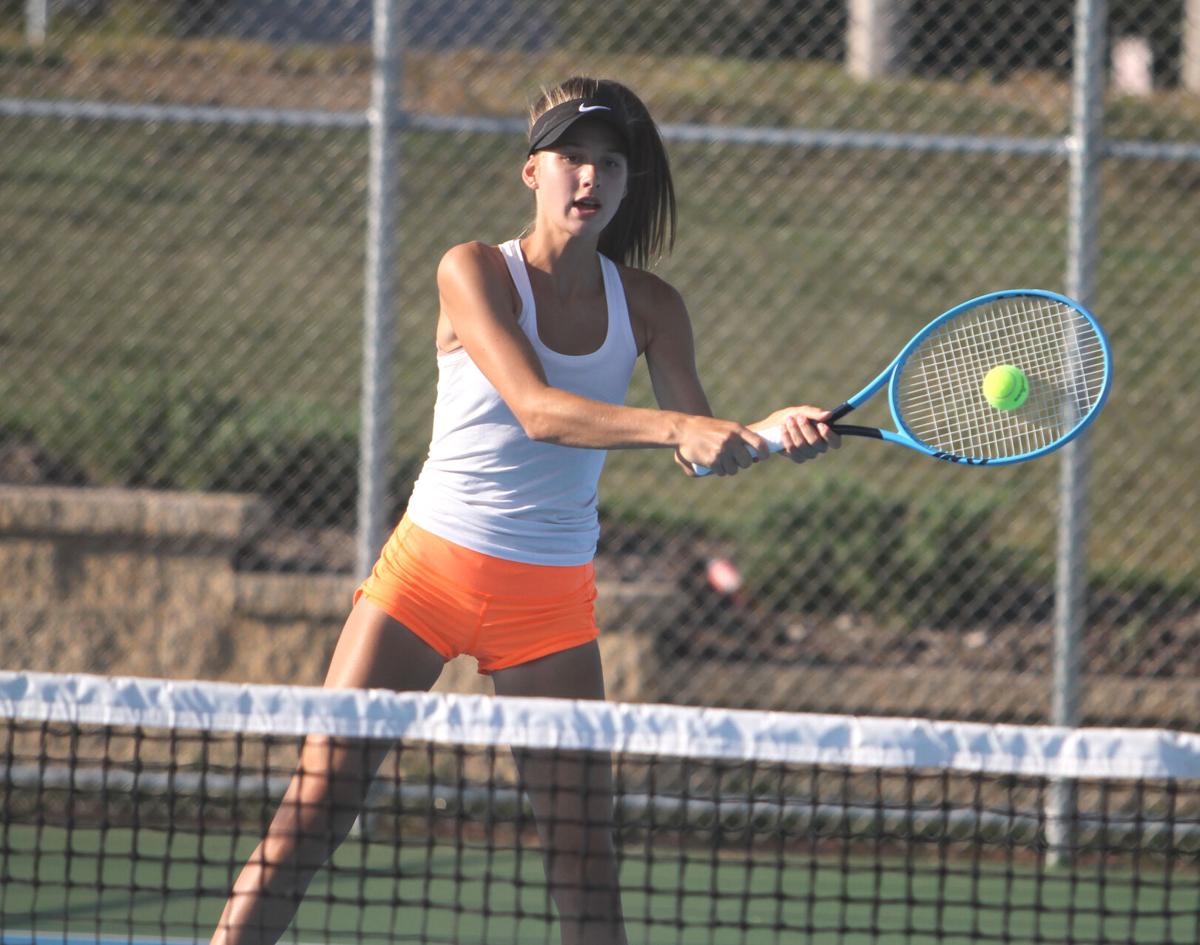 Verona's Annie Nick hits a shot at the net in a No. 3 doubles match against Oregon. Annie Nick and her siter Erin Nick defeated the Panthers' Kristelle Sommers and Anna Martin 6-1, 6-0. 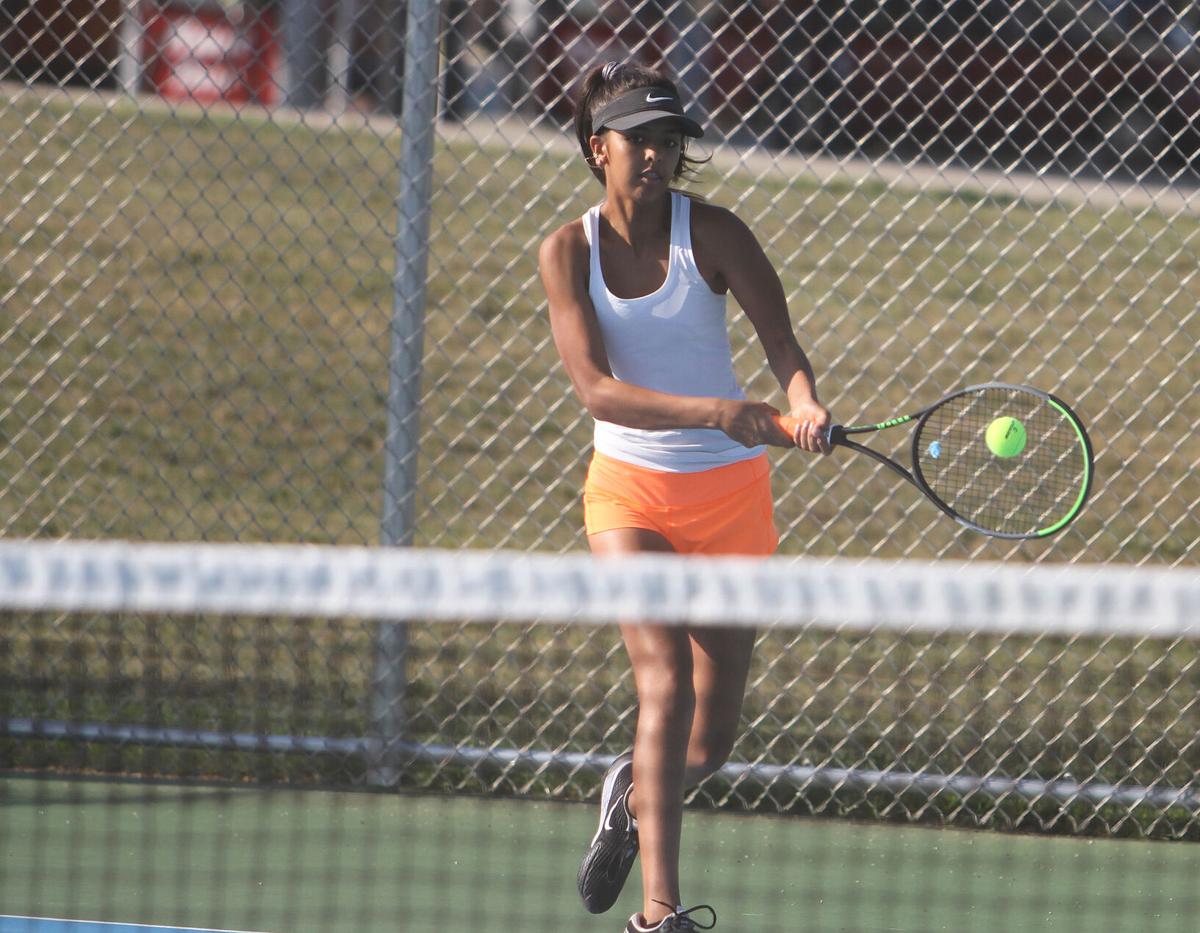 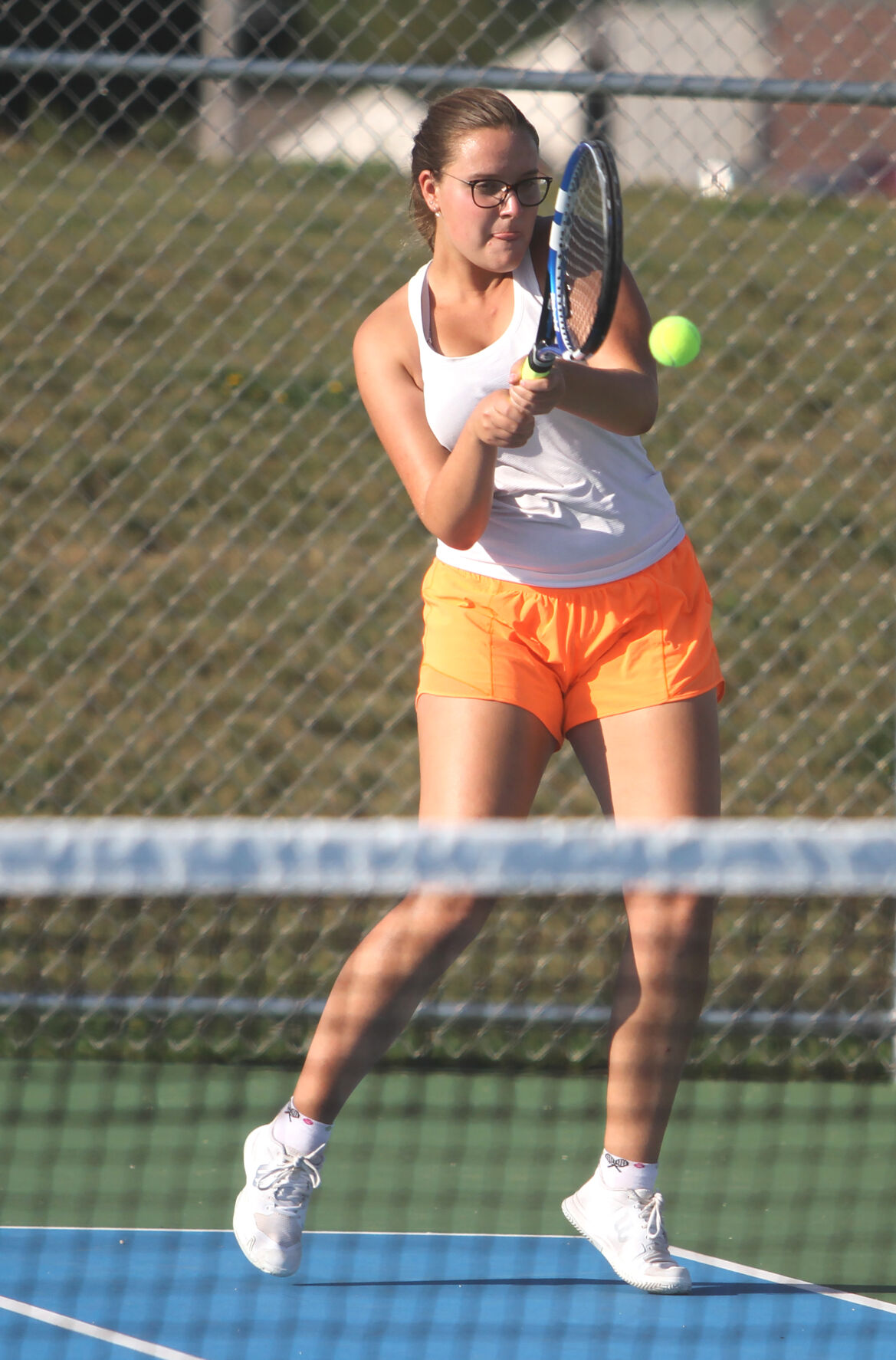 The Verona girls tennis team, ranked fifth in the Division 1 Wisconsin Tennis Coaches Association state poll, still has three singles players unbeaten this season after rolling to a championship at the Waunakee Invitational on Saturday, Sept. 11.

Verona freshman Naisha Nagpal (17-0) at No. 1 singles, junior Zoe Qureshi (17-0) at No. 3 singles and senior Elsa Queoff (17-0) at No. 4 singles each continued unbeaten seasons. Senior Samantha Breitbach also went 3-0 at the invite.

“I will take it,” Verona coach Mark Happel said of having three unbeaten singles players. “We definitely are off to a great start. The whole team is. Not everyone is going to win all of their matches but we are playing really well and getting better.”

The Wildcats knocked off Oregon in a nonconference match 7-0 the day before. Verona lost its first conference showdown to fourth-ranked Middleton 4-3 on Thursday, Sept. 9, at Middleton High School.

Bring ranked fifth in the state has provided motivation.

“I think it has made them work hard to keep it (ranking) and move up,” Happel said.

Verona has a big conference match at noon at Madison West this Friday.

“We are hoping to be top three in the conference, but if everything bounces right, who knows,” Happel said.

The Wildcats swept all four singles matches to edge the Warriors Sept. 11, in the title match of the Waunakee Invitational.

“Our singles play was fantastic,” Happel said. “They were firing on all cylinders.”

“She has the physical skills and the mental skills,” Happel said. “When you put that all together it’s hard to beat.”

Nagpal played in a lot of USTA tennis tournaments as a youth player.

“She’s used to the big match atmosphere,” Happel said. “It doesn’t phase her.”

In the view of some coaches there is more at stake playing high school tennis tournaments with peers.

Against Sauk Prairie, the Wildcats won all four singles matches. Nagpal cruised by Sauk Prairie’s Quinlyn Mack 6-1, 6-2. Qureshi, who played No. 2 singles in the match against the Eagles, defeated Devin O’Connor 6-0, 6-0 and Queoff at No. 3 singles defeated the Eagles’ Ava Andres 6-3, 6-1. At No. 4 singles, Verona’s Annalise Cooper clipped Sauk Prairie’s Emilia Pape 6-3, 7-6 (5).

“Sam ( Breitbach) had a really long match against Waunakee and I wanted to give her some recovery time,” Happel said.

At No. 3 doubles, the Nick sisters rolled by the Eagles’ Allison Shelton and Molly Diske 6-2, 6-1.

The singles for Verona were dominant in the victory against West De Pere, winning 49 of the 52 games.

“Our doubles ran into some really good competition and are getting better,” Happel said.

The Wildcats swept all seven flights in a nonconfernce dual against Oregon Sept. 10, at Verona Area High School.

In a Big Eight Conference showdown, the Wildcats won three singles matches, but lost a nail-biter to the Cardinals Sept. 9, at Middleton High School

Happel said it was a tough conference match that could have gone either way.

“We will see them again at conference and the subsectional,” he said.