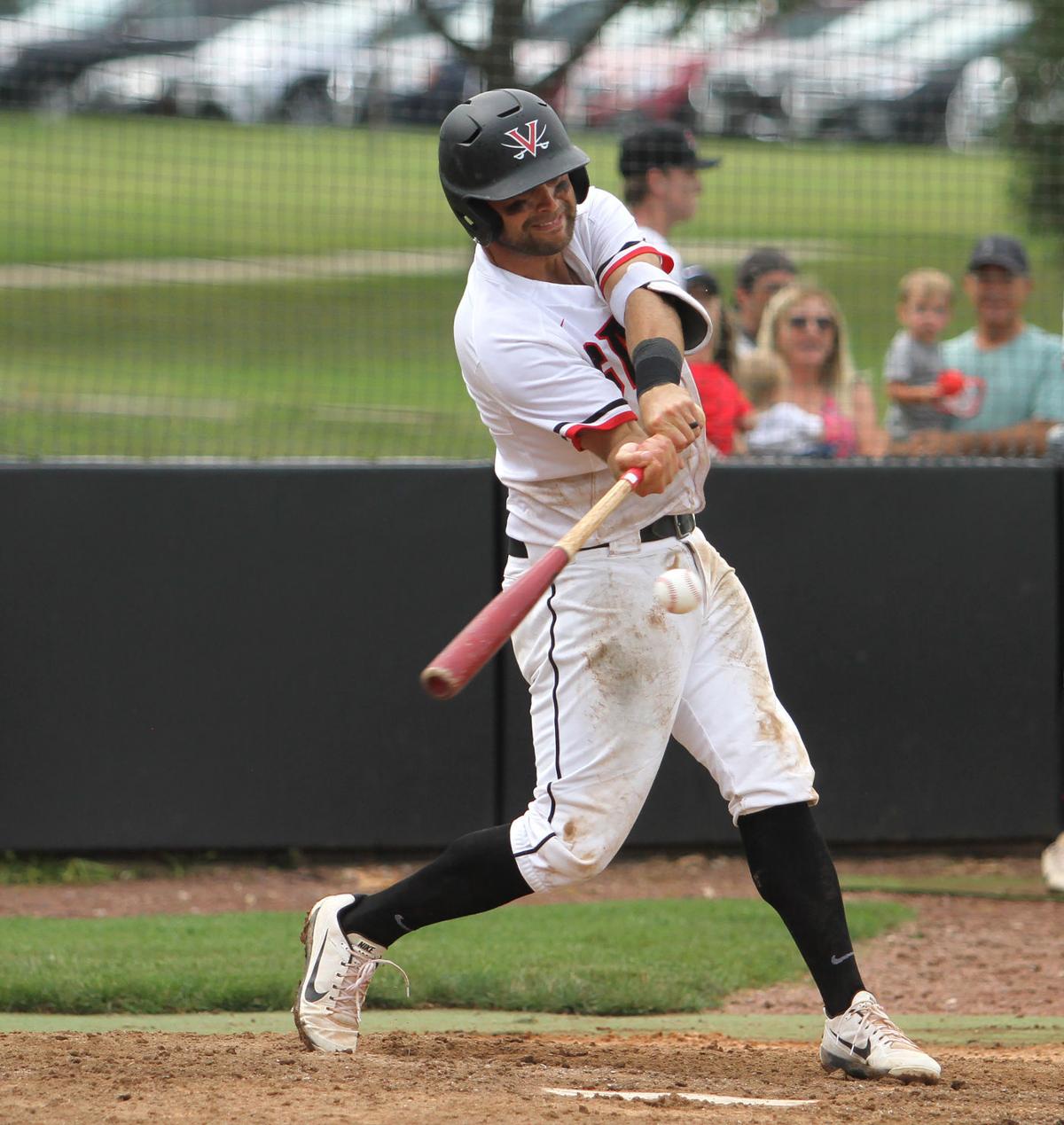 Verona’s Justin Scanlon hits a double to center in the bottom of the seventh inning in the Cavaliers’ 11-8 loss to Dodgeville in a first-round Home Talent League Western Section playoff game at Stampfl Field in Verona. 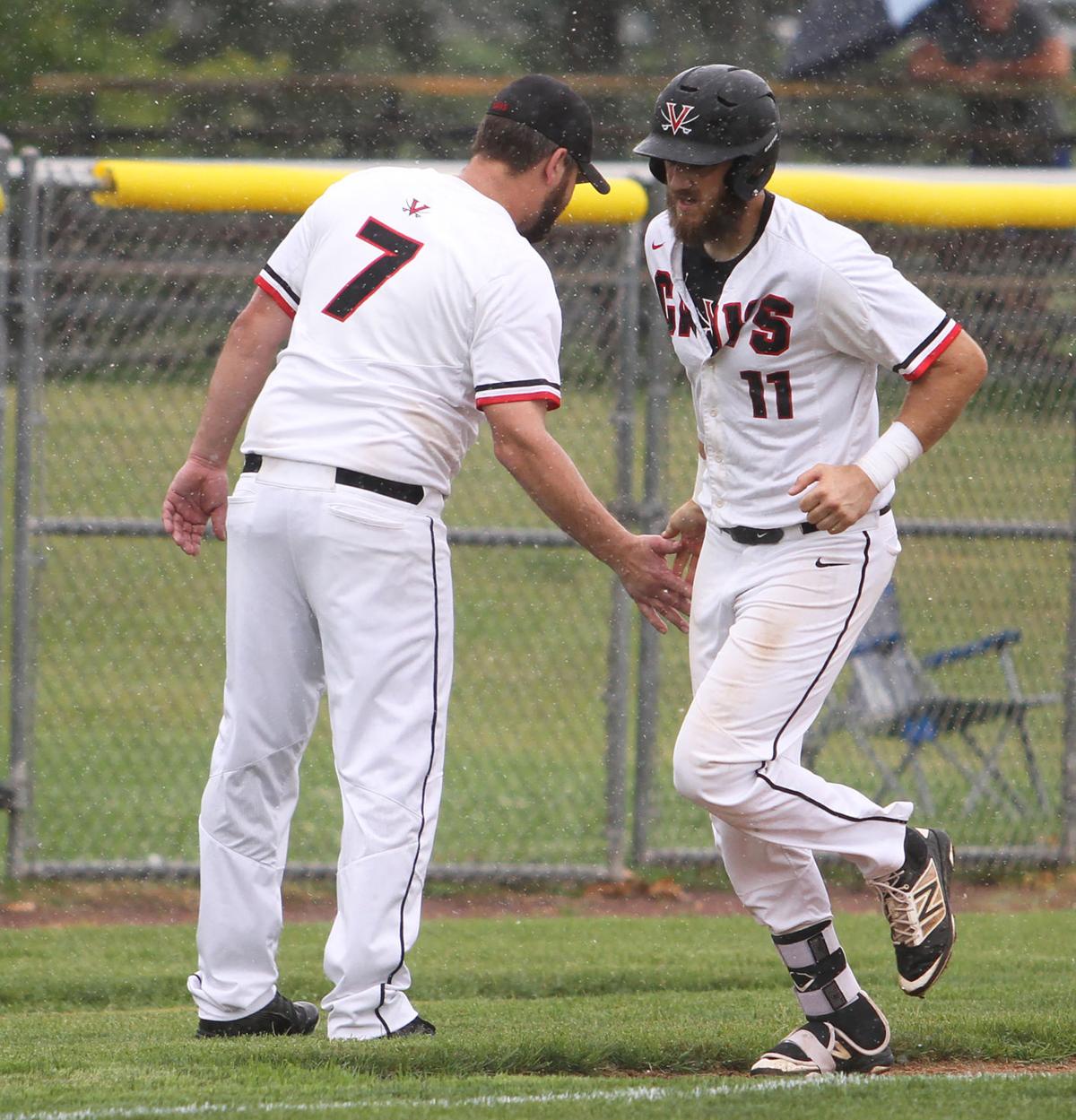 Verona’s Mike Jordahl, left, is congratulated by Verona’s Bill Engelhart after hitting a game-tying three-run home run in the bottom of the fifth inning. 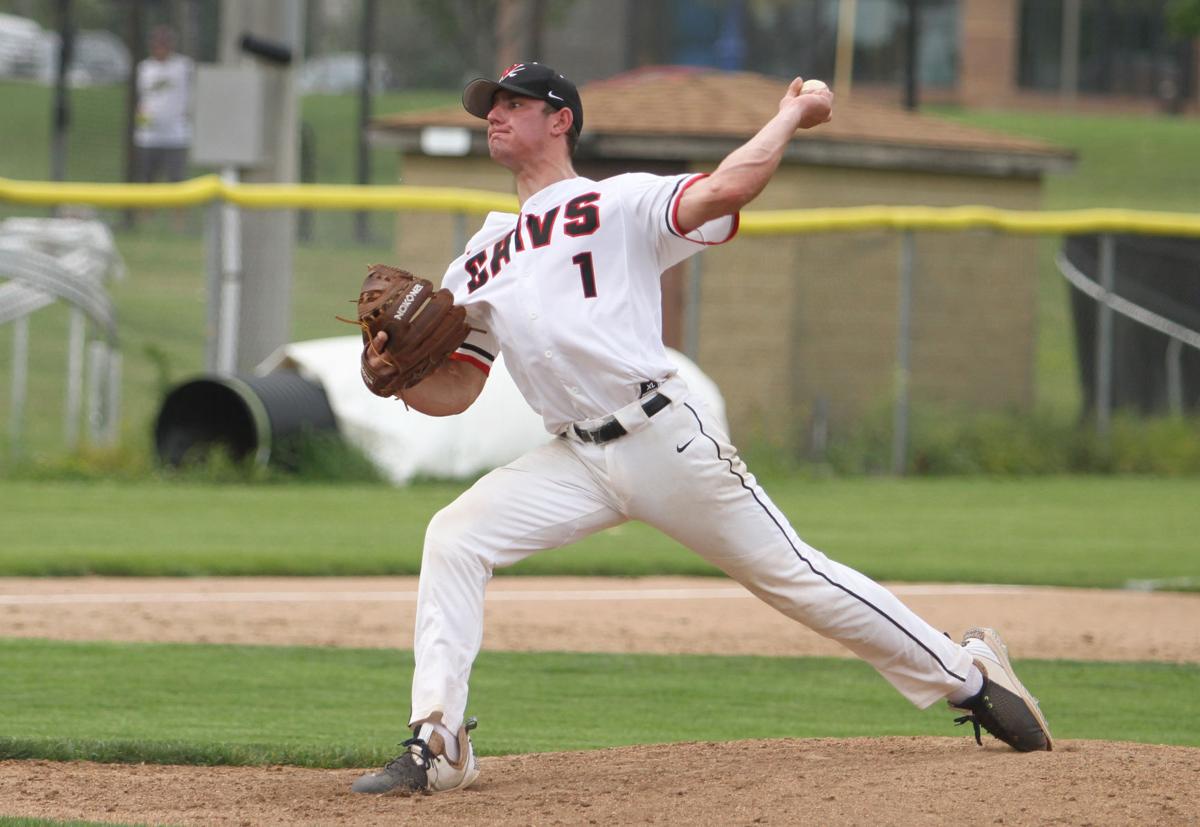 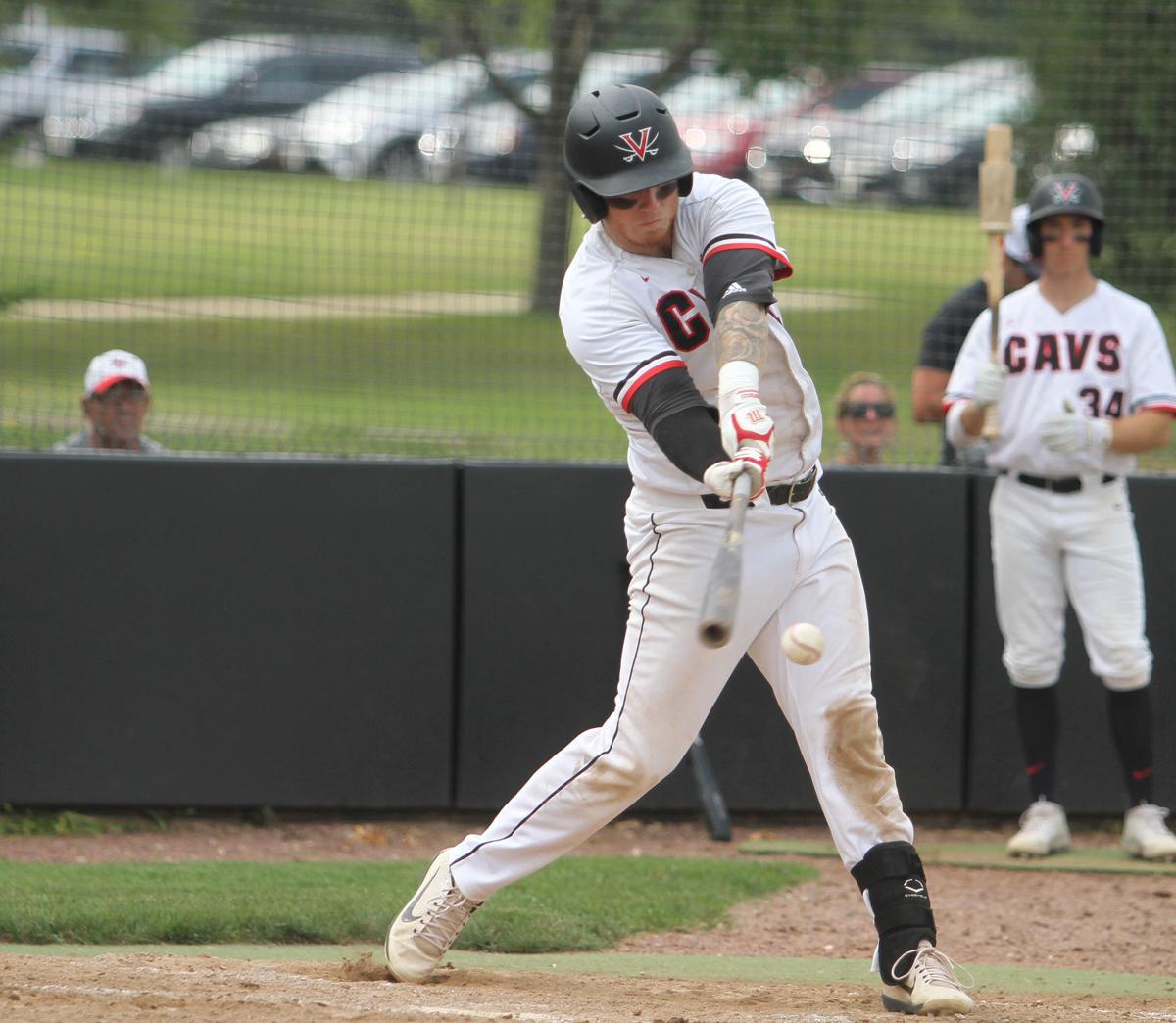 Verona’s Justin Scanlon hits a double to center in the bottom of the seventh inning in the Cavaliers’ 11-8 loss to Dodgeville in a first-round Home Talent League Western Section playoff game at Stampfl Field in Verona.

Verona’s Mike Jordahl, left, is congratulated by Verona’s Bill Engelhart after hitting a game-tying three-run home run in the bottom of the fifth inning.

Verona has relied on its bats all season in setting the tone en route to earning the second seed in the Home Talent Western Section playoffs.

Yet, it was Dodgville that put on a hitting clinic as the seventh-seeded Knights upset the Cavaliers 11-8 in a first-round Western Section playoff game on Sunday, Aug. 8, at Stampfl Field in Verona. Verona (8-2), the seven-time Home Talent League champion, had their hopes of a third straight title dashed.

“Hats off to them,” Verona player-manager Justin Scanlon said of Dodgeville. “We didn’t expect to see that lineup for sure. I know some of those may have just got back from playing college ball. It may have caught us off-guard a little bit when they came out swinging.”

The bottom three hitters in Dodgeville’s lineup went a combined 7-for-15. Dodgeville’s Grant Bossert, the Knights’ No. 8 hitter, led the way, going 3-for-5 with two doubles and four RBI. Dodgeville improves to 4-6 and moves on to the second-round of the Western Section playoffs on Sunday, Aug. 15.

“The wind was howling out, they put the ball in play and the ball jumped,” he said. “We would like to win a game when we score eight runs. It just wasn’t in the cards today.”

Scanlon went 3-for-5 with two runs scored. Verona’s Ricky Bergstrom was on base all four times he batted, going 1-for-1 with three walks. Verona first baseman Mike Jordahl crushed a game-tying home run to right in the bottom of the fifth, but the Cavaliers couldn’t overcome the Knights’ 16-hit attack.

“It was still a little bit of a different team today,” Jordahl said of Dodgeville. “You still have to beat them regardless. They have a lot of college kids and they swung well and we didn’t today. That’s baseball.”

“He wasn’t as sharp as he normally is, but he was getting out of jams,” Scanlon said. “He’s got us here. He’s been our guy the last four or five weeks.”

Dodegville finally broke through for a big inning off Klawiter with a four-run fifth. Dodgeville’s Dayne Leonard singled to left and Justin Baeher singled to right. Grady Gorgen knocked in a run on a fielder’s choice to cut the Cavaliers’ lead to 3-2. Grant Brossert followed with a clutch two-run double to left to give the Knights a 4-3 lead. Jack Hellman blooped an RBI single to right and Jordan Olson’s RBI single to left gave the Knights a 6-3 lead.

When it started raining in the bottom of the fifth, the Cavaliers rallied. Bergstrom walked and Tucker Teskey reached on a fielder’s choice. Scanlon followed with a single to left. Jordahl then crushed a three-run home run to right toi tie the game 6-6 as the downpour began as he circled the bases. The game was delayed 10 minutes by rain and another 20 minutes to prep the field.

“I’m just trying to find a ball over the plate, get on top of it and drive it,” he said. “I wasn’t sure if it was going to be out or not. I was just glad to keep the team in the game.”

Larson pitched eight innings and gave up five earned runs on seven hits to get the win. Locked in a tie game at 6, Verona had a golden scoring opportunity after Scanlon led off with a double to center in the bottom of the seventh.

With one out, Dodgeville intentionally walked Jordahl. Verona’s Luke Yapp hit a line drive to a drawn-in Dodgeville second baseman, who made the catch and threw to third for an inning-ending double play that caught Scanlon straying from the base.

“That was a huge momentum-killer,” Scanlon said. “It’s a tough call, but that is how baseball works. You have to be on your A-game all the time. It just wasn’t our day today.”

Verona’s Sam Pederson pitched two perfect innings before he ran into trouble in the eighth when the Knights scored five runs.

Pederson walked the first two hitters in the eighth. After Dodgeville’s Austin Larson moved both runners into scoring position with a sacrifice bunt, the Cavaliers opted to intentionally walk Legnard.

“It’s never over until the last out,” he said. “You have to keep grinding out at-bats and trying. I was really proud of the bottom of the order. We didn’t quit.”

The Cavaliers rallied for two runs in the ninth. Bergstrom singled and Teskey doubled to center off Larson. Courtesy runner James Rae scored on a wild pitch. Jordahl knocked in a run on a groundout to cut the Knights’ lead to three runs. Liam Strumpf then got Yapp to ground out to shortstop to end the game.