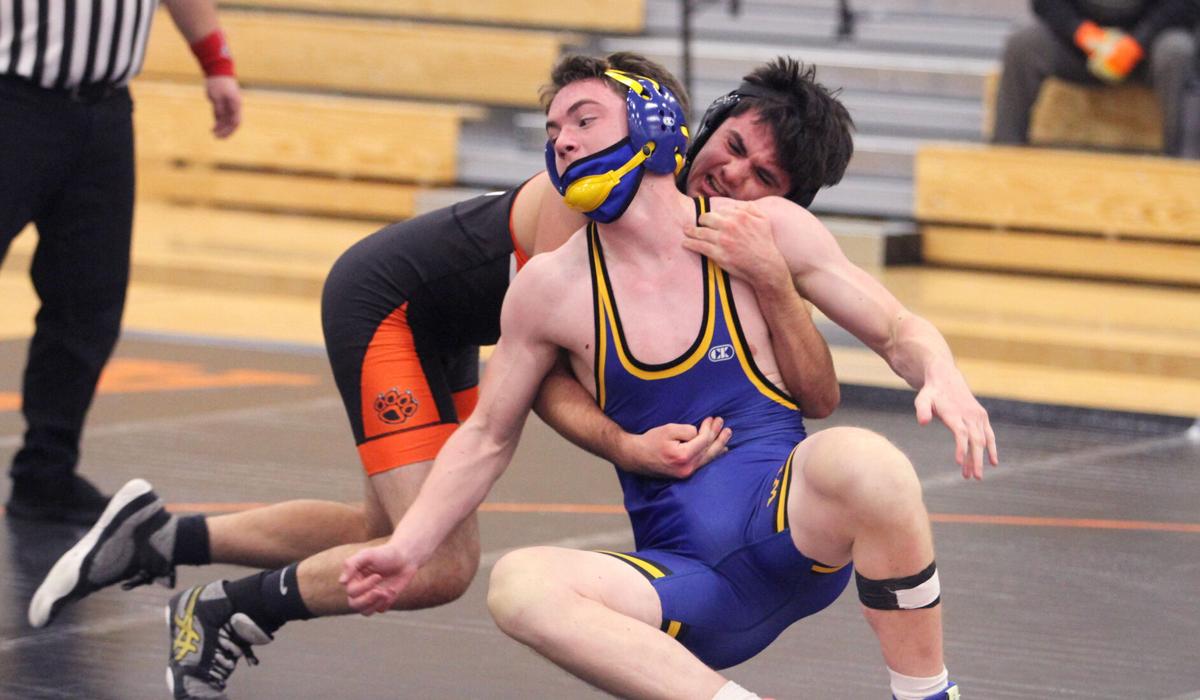 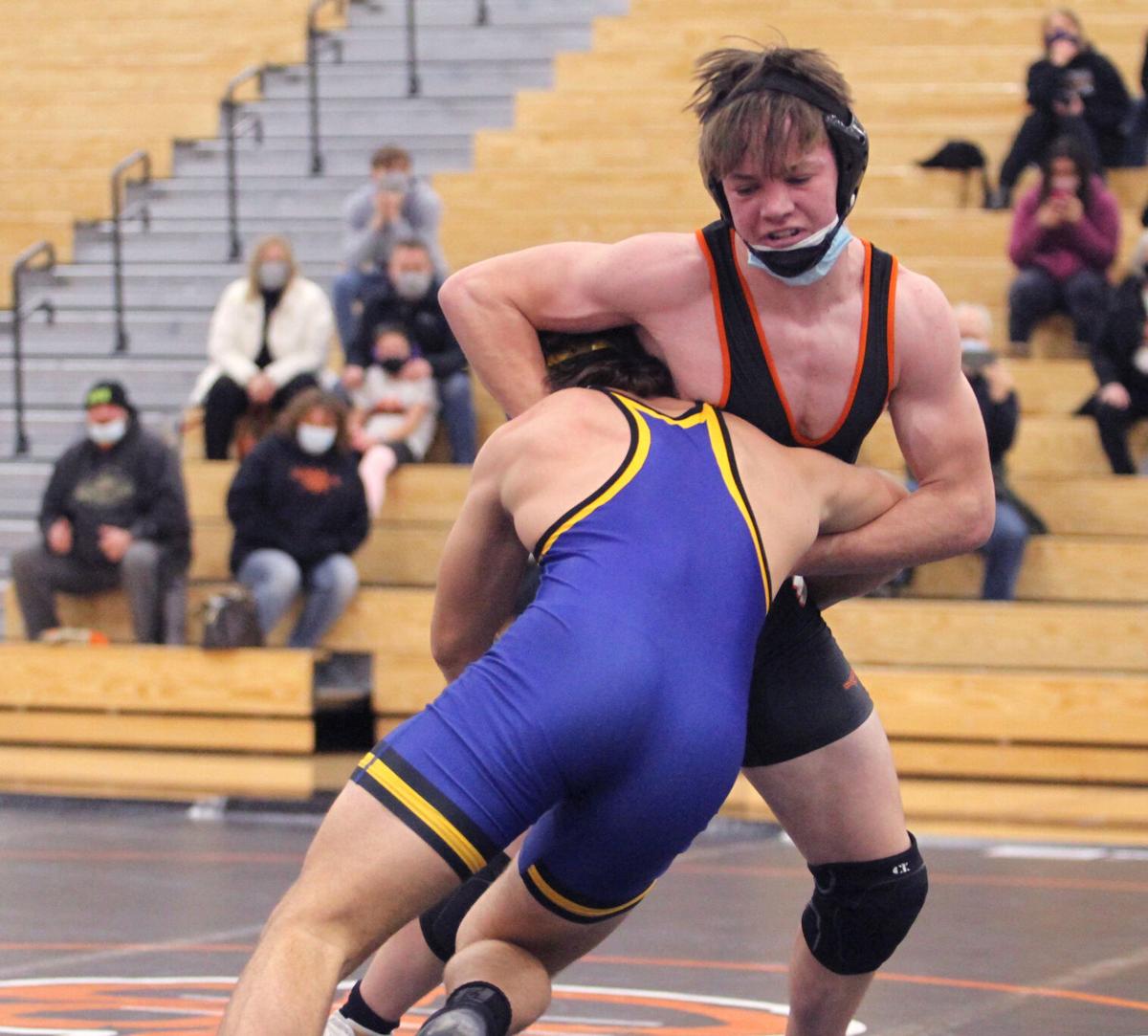 Verona senior Jay Hanson proved that he’s one of the premier heavyweight wrestlers in the area and he helped put the Wildcats in the driver’s seat to win the Big Eight Conference championship.

Hanson (26-2), ranked No. 7 in the Division 1 Wisconsin Wrestling Online state poll, won the championship at the Sauk Prairie Invitational on Saturday, Jan. 8, in Prairie du Sac. He was one of a quartet of Verona grapplers who finished top-four to lead the Wildcats to a seventh-place finish at the 18-team tournament. Verona (128 points) finished 10 points behind sixth-place Waukesha North. Ithaca/Weston captured the team title 282-218 over West Bend East followed by third-place Monroe (184.5).

“It’s a measuring stick to see where we are,” Verona coach Bob Wozniak said. “It’s really a tough tournament.”

Wozniak said instead of having some inexperienced wrestlers get overmatched in the invitational, he had them wrestle in the JV Wisconsin Challenge Series to earn more experience.

Verona’s Brett Burrs at 152 pounds finished second place in the Wisconsin Challenge Series and earned a trip to state in Wausau on Saturday, Jan. 22. The Wildcats only took 10 varsity wrestlers.

“If we would have had a couple more guys we could have moved up a couple of spots,” he said.

Verona was coming off a 63-3 Big Eight Conference dual meet win over Madison West on Friday, Jan. 7, at Verona Area High School. Verona (3-0) will wrestle at Middleton on Jan. 21. If the Wildcats win that match, they would advance to the championship of the Big Eight Showcase and likely face Janesville Parker in a championship dual meet.

“The fact that we haven’t beat Janesville Craig in however many years, to come out and beat them and have a chance at the title is pretty exciting,” Hanson said.

Hanson was dominant in winning the championship at heavyweight at the Sauk Prairie Invitational on Jan. 8, in Prairie du Sac.

Hanson received a first-round bye and then pinned Ithaca/Weston’s Nick King in a quarterfinal match in 3 minutes, 2 seconds. He breezed by Badger’s Jackson Braden by a fall in 53 seconds in a semifinal match. Hanson then pinned eighth-ranked Sauk Prairie junior Nolan Vils in 2:21 in the title match.

“That made a statement,” Wozniak said of Hanson’s pin against Vils. “Jay has put in the time in the offseason and got a lot more explosive.”

Cael Wozniak (20-6) defeated Columbus’ Anthony Goelzer 5-2 in a third-place match. After a first-round bye, Wozniak defeated Seymour’s Lucas Leisgang 10-3 in a quarterfinal match. He then was clipped by Ithaca/Weston’s Jacob Manning 9-7 in a semifinal.

Shields (11-9) had a similar path to taking fourth. After a first-round bye, he pinned Seymour’s Gordon Grassel in 2:26. West Bend East’s Riley Schaefer then pinned him in 2:14 in a semifinal match. Shields was then pinned by River Valley’s Zach Eames in 55 seconds in a third-place match.

“He doesn’t have a ton of experience, but he’s getting better every match,” Wozniak said of Shields.

Murphy (17-8) went 2-2 in the tournament. He pinned Columbus’ Brayden Holdorf in 39 seconds in the first round. He then breezed by Seymour’s Joseph Dey by fall in 1:12. He was pinned by Wisconsin Dells’ Hunter Isaacson in 1:24 in a semifinal match. Ithaca/Weston’s Marshell Shelf then pinned Murphy in 2:35 in a third-place match.

The other Verona wrestlers who placed were freshman Will Neuroth (113) finishing sixth, sophomore Bryson Kundinger (138) and senior Spencer Lokken (170) taking seventh and sophomore Michael Scharenbroch (145) placing eighth. Neuroth, Kundinger and Lokken each went 2-2. Neuroth received a bye after being pinned in a quarterfinal match. He defeated West Bend East’s Caleb Hillshafer 9-7 in a consolation semifinal. Poynette’s Isaiah Gauer then pinned him in 2:02 in a fifth-place match.

Ithaca/Weston’s Will Burnley edged Kundinger in a sudden victory 11-6. Kundinger bounced back to pin Seymour’s Wyatt Bunnell in 1:52 in a seventh-place match.

Lokken was pinned by Ithaca/Weston's David Fargen in 1:47 in a quarterfinal match. He came back after a second bye and lost to West Bend East’s Connor Steldt 12-6. Lokken responded by pinning Columbus’ Otto Andler in 2:32 in a seventh-place match.

Scharenbroch went 2-3 and after being pinned in the first round by Sauk Prairie’s Dylan Breunig, he received a bye and then pinned Wisconsin Dells’ Mikolaj Amaya-Owerczuk in 1:25 in a consolation match. He was then pinned by Pardeeville’s William Becker in a consolation semifinal in 3:54. Breunig for the second time in the tournament defeated him 7-0 in a seventh-place match.

The Regents forfeited eight weight classes and the Wildcats went 2-1 in the three matches that were wrestled Jan. 7, to roll by Madison West.

“I thought today was just another warm up for tomorrow’s tournament at Sauk,” Hanson said.

Hanson said the key was to look for whatever attack was there against Gustafson.

“It’s a mindset kind of thing thinking and knowing you are going to win and wrestle like it to my hardest ability,” he said.

Burrs (152) defeated the Regents’ Leonardo Ruggiero 5-3. Ruggiero scored on a takedown with 57.6 seconds left to take a 3-2 lead. Burrs answered with two escapes in the final 37 seconds to take a 4-3 lead. Ruggiero was also called for stalling in the final 35 seconds to seal the victory.

In the final match, Lokken lost to Madison West’s Patrick Burke 4-0. Burke scored on a reversal with 1:01 left in the third period to put the match away.